US senate minority leader Chuck Schumer says that president Donald Trump "sat on the sidelines" as he announces an agreement to end a three-day shutdown of the US government. Video: Reuters 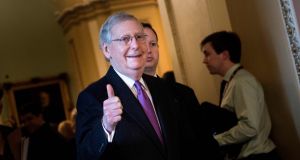 Senate majority leader Senator Mitch McConnell: said on Sunday that he intended to begin a debate on immigration in the next few weeks. Photograph: AFP/Getty Images

Senate minority leader Chuck Schumer said he and majority leader Mitch McConnell have reached an agreement to pass a short-term spending Bill on Monday and reopen the government, ending a three-day shutdown.

Key Senate Democrats, including Bill Nelson of Florida and Joe Manchin of West Virginia, predicted the Senate would have enough votes to advance a stopgap funding bill that would reopen the federal government.

“You’ll see a resounding yes,” when the vote is called, said Mr Nelson.

Democratic Senators demanded a more binding promise from Mr McConnell for a vote on immigration legislation in exchange for reopening the government, as the Senate prepared for a noon vote on a Bill to fund the government until Febuary 8th.

“Hopefully we can resolve this in the next day or two,” said Democrat Amy Klobuchar of Minnesota after a bipartisan meeting of Senate moderates. GOP Senator Lisa Murkowski of Alaska said: “There’s a recognition getting to the debate on immigration is an important and that sooner is better than later.”

Mr McConnell said on Sunday that he intended to begin a debate on immigration in the next few weeks.

Democrats want legislation to protect undocumented immigrants brought to the US as children and Republicans are setting conditions for border security and enforcement.

Republican Senator Lindsey Graham of South Carolina said the majority leader should use stronger language to promise action on immigration if Democrats convince him that would be enough to end the shutdown.

The Senate is scheduled to take a procedural vote around noon on Mr McConnell’s Bill to fund the government until Febuary 8th Democrat Heidi Heitkamp of North Dakota said the vote might be delayed if Senators need more time. – Bloomberg