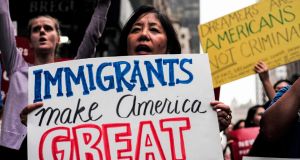 Irish groups have expressed concern about the impact of possible changes in policy on immigrants and the undocumented as the US Senate looks set to consider a new package in the coming weeks.

The current government shutdown in the United States has been mired in controversy over immigration, with Democrats insisting that an immigration package be linked to a funding Bill to keep the government running.

While much of the focus has been on “dreamers” – the estimated 800,000 undocumented immigrants who were brought to the United States as children – US politicians are also considering changes to the visa lottery system.

President Donald Trump announced he was abolishing the scheme in November, after it emerged that the suspect in a recent terrorist attack in Manhattan had come to the US under the lottery.

Sources say that one option actively under discussion in Congress as Republicans and Democrats try to broker a compromise is a reduction in the number of visas offered to most countries.

While relatively few Irish people receive visas through the annual lottery system – about 150 a year are granted visas under the scheme – it is one of the few options open to Irish people to apply to live in the US without an employment sponsor.

Ciaran Staunton of the Irish Lobby for Immigration Reform said the latest clampdown on immigration illustrates why Ireland needs to secure immigration reform, both for undocumented Irish people living in the US and for future flows of immigrants from Ireland.

The Government is preparing for a renewed push on immigration reform ahead of the St Patrick’s Day visit by Taoiseach Leo Varadkar to Washington DC – traditionally an opportunity for the government of the day to highlight the specificities of the Irish immigration issue to the US president and senior members of Congress.

The Government’s envoy to the US, John Deasy, is due in Washington this week where he will meet senior officials ahead of the St Patrick’s Day visit.

While the Irish Government is continuing to push the case for the undocumented Irish already living in the US to be given a path to citizenship, there has also been a call to secure new avenues for Irish people who want to move to the country.

An immigration Bill that passed the US Senate in 2013 but failed to garner enough support in the House of Representatives included a proposal for 10,500 “E3” visas for Irish citizens. Based on a visa system currently offered to Australians, it would have given Irish people access to two-year renewable work visas.

Senator Billy Lawless, the Chicago-based businessman appointed as senator with responsibility for the diaspora in 2016, said he is continuing to pursue all options to improve access for Irish people who want to move to the US.

“Over the last decade in particular we have had very few Irish people moving to the United States, with most choosing to go to Australia, New Zealand and Canada instead. We will continue to try and seek any opportunities to improve visa options for people who want to live and work in the United States.”