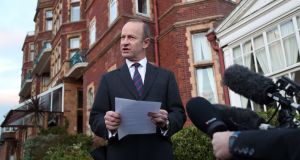 Henry Bolton announcing his decision not to resign as Ukip leader in Folkestone on Monday. Photograph: Gareth Fuller/PA Wire

Ukip leader Henry Bolton has refused to step down after the resignation of a number of senior party figures and a unanimous vote of no confidence in him by its National Executive Committee (NEC). Mr Bolton, a former army officer who became leader last September, said he would stay in his role until party members vote on his future.

“I respect the next steps in the constitutional process and will therefore not be resigning as party leader,” he said.

Mr Bolton, who was Ukip’s fourth leader in 18 months, came under pressure to resign after it emerged that his former girlfriend Jo Marney posted racist tweets. Forced to choose between Ms Marney, a 25-year-old former glamour model, and the party leadership, Mr Bolton announced that he had dumped his girlfriend. A few days later, however, the couple were spotted together at the National Liberal Club, sparking renewed demands that he should go.

At a meeting on Sunday, the ruling NEC unanimously backed a motion of no confidence in the leader and a succession of senior figures resigned their positions on Monday. Mr Bolton said the party structures needed to be overhauled and those he claimed had plotted against him should be rooted out.

“Without reflecting at all on its individual members, the NEC, as presently constituted, is unfit for purpose and has severely handicapped the party’s progress and political delivery for some years, as all recent Ukip leaders will attest. It has not only lost the confidence of me as the party leader in its ability to act objectively as the party’s governing body, it has also lost the confidence of a large proportion of the membership,” he said.

“The NEC requires significant and urgent reform. To that end, again during the coming weeks, I shall be proposing a new party constitution, with a newly constituted and reformed NEC. Likewise, it is now time to put an end to the factional in-fighting within the party and to remove those who have been a part of that. In a single phrase, it is time to ‘drain the swamp’.”

Founded in 1993, Ukip won three seats in the European Parliament and grew throughout the following decade, particularly after Nigel Farage became leader in 2006. The party’s success, which saw it win more votes than any other British party in the 2014 European Parliament elections, was among the factors which persuaded David Cameron to promise a referendum on Britain’s EU membership.

After Mr Farage resigned as leader following the referendum, Ukip descended into chaos and infighting. At last year’s general election, it won just 1.8 per cent of the national vote.