Recognition would not conflict with pursuit of talks, Abbas tells EU foreign ministers 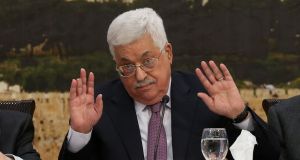 Palestinian president Mahmoud Abbas has appealed to European Union member states “swiftly to recognise the state of Palestine”. Such a move, he said would be in “no contradiction with the pursuit of negotiations”.

Speaking on the fringes of a meeting of EU foreign ministers a month after Israeli prime minister Binyamin Netanyahu had also done so, the 82-year-old Mr Abbas deplored threats by the US administration to cut funding to the United Nations’ Palestinian relief agency, UNRWA. But he insisted that the Palestinians remained committed to peaceful means, to a two-state solution and to opposing terrorism “locally, nationally and regionally”. “We want to talk,” he said.

Palestinians continue to aspire to unite their national territory – the West Bank and Gaza – to create a single state with East Jerusalem as its capital, he told journalists. In the latter regard, he had the explicit support of the EU ministers, who also reaffirmed their determination to see talks restarted and to a two-state solution

The EU’s foreign policy chief, Federica Mogherini, said she believed there were now opportunities for the talks process to resume, but it was clear to the EU that only a multilateral approach could bring results. While the Palestinians had made it clear that the US on its own was incapable of launching a dialogue, no peace process could function without the US, she said.

The EU must play a central role along with others such as Norway and the Arab states, she said, and it would try to play a convening role in the weeks ahead.

Minister for Foreign Affairs Simon Coveney said the EU “recognises the US needs to be very much involved in any negotiated solution, but also recognises that the Palestinians want to see other countries also involved”.

Recognition of the Palestinian state was not on offer on Monday, but EU ministers, eager to show their continued support for a two-state solution in the wake of what many fear is a repudiation of a long-standing international consensus by US president Donald Trump, supported opening up formal talks on a new association agreement between the EU and the Palestinian Authority. This would, Mr Coveney said, help put “foundations in place for a future Palestinian state”.

The EU insists that recognition of Palestinian statehood is a matter for individual member states. Nine have already done so, including Sweden and Poland. Ireland has not, arguing that it is better for the EU to do so collectively. Mr Coveney said Ireland “wants to recognise the state of Palestine but in the context of a negotiated solution”.

Mr Coveney deplored the expected US decision to hold back some $65 million in funding for Unwra, which, he said, played a key humanitarian role throughout the region. He said Ireland would consider increasing its €4 million contribution , and that if necessary “the international community collectively, including the European Union will certainly look to trying to maintain UNRWA’s infrastructure”.

Foreign ministers on Monday also agreed to enforce a a travel ban and an asset freeze against seven Venezuelan officials for their involvement in “the non-respect of democratic principles or the rule of law as well as in the violation of human rights”.

The council promised to review sanctions against Zimbabwe following the removal of Robert Mugabe as president. A strong emphasis was placed on democratic elections with the EU offering to provide election observers.