Macron and May to discuss Brexit at president’s summer residence 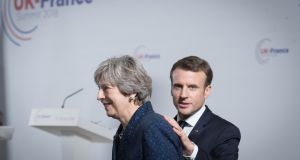 British prime minister Theresa May and French president Emmanuel Macron. “I imagine Macron will tell Theresa May ‘we will be as constructive as we can, but Monsieur Barnier will tell you our position’,” said a European diplomat

British prime minister Theresa May and her husband Philip will break off their summer holiday on Friday to call on Emmanuel and Brigitte Macron at the French president’s summer residence at Brégançon.

The Mays are scheduled to arrive at 6pm French time. They will dine with the Macrons after a working meeting between the two leaders.

May’s visit to Brégançon is the fourth high-level meeting between British and French officials in France in eight days. It has strengthened speculation that the UK is lobbying France to be more lenient in Brexit negotiations.

The 14th century fortress is built on a rocky outcrop jutting into the Mediterranean near Toulon, and was recently the subject of controversy. The Macrons claim the residence needs a swimming pool because their privacy cannot be protected in the sea.

However, the diplomatic offensive may be futile. France is determined that the UK not be seen to benefit from Brexit, and was considered the most hardline EU country even before Macron took office last year.

Hunt has also visited Austria, Germany and Portugal in recent days, and British sources say the diplomatic flurry is more a function of the parliamentary recess than a British desire to divide and rule.

Unlike their French counterparts, British cabinet ministers are also members of parliament and must be on hand to vote. A similar spate of continental visits occurred during the February recess.

The Élysée refused to comment on the Macron-May summit, although an unnamed source at the Élysée told the Financial Times it takes place at the request of Downing Street. A British source said the two leaders planned to meet for some time, and that the French, as owners of Brégançon, proposed the venue.

An official British source sought to lower expectations. “There will be no outcome from the meeting. No statement. No declaration. It’s a standard working meeting.”

The timing of the meeting is nonetheless significant. Negotiations between the EU and Britain are scheduled to resume on August 13th. Raab met with the EU’s negotiator Michel Barnier for the first time in Brussels on July 19th, after Raab replaced David Davis as Brexit secretary.

Two important dates are looming: an informal meeting of EU heads of state and government in Salzburg on September 20th, and the October 18th European Council, when the EU and UK are supposed to finalise a divorce agreement.

Macron is unlikely to make concessions to May on Friday evening. At a time when the French leader is struggling to foster greater cohesion among Europeans, the fact that in two years none of the remaining 27 EU members has broken ranks on Brexit is a source of satisfaction in Paris.

Britain has made overtures to individual capitals, but the French have constantly maintained that Barnier is the sole negotiator. “I imagine Macron will tell Theresa May ‘we will be as constructive as we can, but Monsieur Barnier will tell you our position’,” said a European diplomat in Paris.

“The French are certainly not going to undermine a French negotiator,” the diplomat continued.

Jean-Claude Juncker, the president of the EU Commission, will leave office after the May 2019 EU elections. “If Barnier succeeds in the Brexit negotiations, he will be a strong candidate to replace Juncker,” the diplomat said.

British relations with Barnier have been tense. In an interview with the Evening Standard on the eve of his trip to Paris, Hunt said that “the probability of no deal is increasing by the day until we see a change of approach from the European Commission, who have this view that they just need to wait and Britain will blink”.

The modalities of the UK’s departure are the top priority for the EU, while post-agreement arrangements are a greater priority for Britain. British officials warn of disruption to EU economies if a deal cannot be reached. Carolyn Fairbairn, director-general of the Confederation of British Industry, told Le Monde that 1.2 million jobs could be lost in the EU.

“The UK has decided to reverse 46 years of economic integration and thought it would be easy,” the diplomat said. “The only concession that the French or Europe can make will be window-dressing, to preserve British dignity, not to humiliate them.”