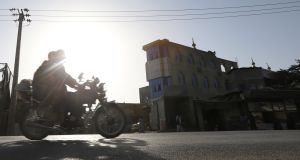 A view of the crime scene where three foreigners working for international food company Sodexo were abducted and killed by unknown gunmen in Kabul, Afghanistan, on Thursday. Photograph: Jawad Jalali/EPA

“An Indian, a Malaysian and a Macedonian citizen were abducted and killed. We have found their bodies,” Hashmat Stanekzai, spokesman for Kabul’s police chief, told Reuters.

Kidnapping has been a major problem in Afghanistan in recent years. While it mainly affects Afghans abducted for ransom, foreigners have also been targeted, either by criminals looking for ransom or by militant groups.

The Malaysian national was 64, the Indian was 39 and the Macedonian was 37. They were all travelling for work with a local driver.

An Afghan security official said they found identity cards next to the bodies and officials at Sodexo in Afghanistan have confirmed their identities. The company had no immediate comment.

Police said the three men were abducted near Pul-e-Charkhi on the eastern outskirts of Kabul but their bodies were found in a car parked in the Mussahi district in the southern part of Kabul province.

“They were shot dead and their bodies were found inside a car,” said Nusrat Rahimi, deputy spokesman for the interior ministry.

Sodexo manages canteens and facilities for offices, the military, schools, hospitals and prisons, and also supplies vouchers for meals and gifts. Its clients range from the Royal Ascot Racecourse in England to the US Marine Corps. – Reuters