Portugal on high alert for fires as temperature break records 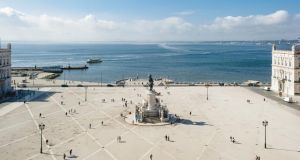 The Praça do Comércio in Lisbon, Portugal. Temperatures are expected to reach up to 43 degrees celsius in the county’s capital. Photograph: Rodrigo Cardoso/The New York Times

Portugal went on high alert on Thursday as temperatures threaten to beat record levels in coming days, prompting the government to warn of a high risk of forest fires in the first test of the country’s readiness after the worst fires in history last year.

The weather in Portugal has been relatively cool and wet so far in 2018 compared to many parts of Europe, but the government has gone to great lengths to ensure that the fires that killed 114 people in 2017 are not repeated.

The highest temperature on record in Portugal was 47.3 celsius in 2003, in the southern Alentejo region.

Several places in the Alentejo are forecast to reach 47 celsius on Saturday, while Lisbon could reach 43 celsius, which is highly unusual for Portugal’s capital by the sea.

The Portuguese Institute of the Sea and Atmosphere (IPMA) said the heatwave that will hit in coming days will be similar to 2003, the second worst year on record for forest fires in Portugal after 2017. The interior minister resigned last year over the fires.

Wildfires in Greece last month killed 91 people in a sharp reminder of the constant threat of deadly fires in southern Europe during the summer.

Portugal’s government issued a “situation of alert”, raising the readiness levels of firefighters, police and emergency medical services until August 6th. There is a ban on lighting fires and access to forests will be limited.

“The government will constantly monitor the situation and appeals to citizens to change their behaviours in consideration of the weather,” the government said in a statement.

Since last year’s tragedy, which struck during an extreme drought, the government has hired hundreds of professional firefighters and sharply stepped up controls to ensure landowners clear their lands of undergrowth that fan fires.

The government has also tested an SMS alert system which will notify people of emergencies.

Although temperatures are soaring, so far there are no indications of the strong winds that made last year’s fires so deadly.

“If temperatures reach the levels we have forecast, they will beat records,” an IPMA spokeswoman said. – Reuters