Three-time Olympic gold medalist Aly Raisman told her abuser and former physician, Larry Nassar, he "should have been locked up a long, long time ago." Nassar is serving a 60-year-sentence for criminal sexual conduct. 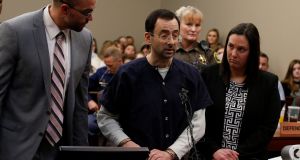 Larry Nassar, a former team US gymnastics team doctor who pleaded guilty to sexual assault charges, makes a statement in the courtroom during his sentencing hearing in Lansing, Michigan on Wednesday. Photograph: Brendan McDermid/Reuters

A gymnastics doctor who molested girls in his care was sentenced to up to 175 years in prison yesterday, bringing to a close a sexual abuse trial that has shocked the world of sport in the United States.

Dr Larry Nassar, who was employed by Michigan State University and was a team doctor for the US gymnastics team during four Olympic Games tournaments, was sentenced to between 40 and 175 years by Judge Rosemarie Aquilina in a Michigan court.

“It is my honour to sentence you because, sir, you do not deserve to walk outside of a prison ever again,” the judge said. “Anywhere you walk, destruction would occur to those most vulnerable,” adding: “I just signed your death warrant.”

The 54-year-old father of three had pleaded guilty in November to seven counts of sexual assault, but during a week-long trial 158 women delivered witness statements detailing how they had been abused by Nassar.

One victim said she was just six years old when the abuse began, while others documented in detail the abuse which happened sometimes in the presence of parents.

Nassar had already been serving a 60-year sentence over child pornography charges. Given an opportunity to comment on Wednesday in Ingham County Circuit Court, Nassar turned to many of the victims who were present and read a statement: “Your words these past several days have had a significant effect on myself and have shaken me to my core. I will carry your words with me for the rest of my days.”

Many of the victims were crying. But Judge Aquilina read from a letter submitted by Nassar to the court last week in which he complained about his treatment in the child pornography case, arguing that his actions had been medical, not sexual, and accusing the media of sensationalising the case.

The scandal has prompted widespread criticism of Michigan State University, where Nassar treated patients, and USA Gymnastics, the organisation which governs gymnastics in the United States.

Three of USA Gymnastics’ senior board members, including the chairman, resigned on Monday, while the president of Michigan State University, Lou Anna K Simon, has resisted calls to resign, despite protests at the university this week.

Rachael Delhollander was the final witness to take to the stand on Wednesday. Now a lawyer and a mother, she was one of the first women to publicise her story in 2016, paving the way for the eventual trial.

“Larry is the most dangerous type of abuser – one who is capable of manipulating his victims through coldly calculated grooming methodologies, presenting the most wholesome and caring external persona as a deliberate means to ensure a steady stream of young children to assault,” she told the court as she recounted the abuse she suffered when she was 15.

Announcing the sentence, Judge Aquilina said she was taking account, not only of the seven women at the heart of the case, but also the dozens of other women who had come forward.