Romanians set to rally against reforms as instability continues 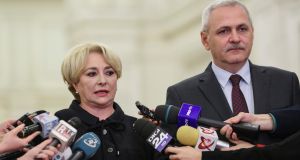 Thousands of Romanians are expected to protest on Saturday against sweeping legal and judicial reforms, as the country weathers more political uncertainty and international criticism of its anti-corruption efforts.

The European Union and United States denounced changes made last month that could tighten political control over Romania’s law courts, and a government push to decriminalise some graft offences has caused alarm at home and abroad.

The reforms are spearheaded by Liviu Dragnea, leader of the ruling Social Democrats (PSD), who cannot serve as prime minister due to a vote-rigging conviction and had some €27 million in assets frozen in November as part of a major fraud investigation.

Mr Dragnea’s pulling of government strings from behind the scenes has caused power struggles in the PSD, however, and this week the party ousted one of its own members from the post of premier for the second time in seven months.

Protest organisers said the PSD-led coalition’s “massacre of justice . . . is more than just an attack on law enforcement and the anti-corruption fight. It is an assault on democracy in Romania. ”

“The first two months of 2018 will be decisive for consolidating democracy in Romania,” they declared, urging people from across Romania to join a rally on Saturday entitled “All roads lead to Bucharest – the ‘revolution’ of our generation”.

Last winter, hundreds of thousands of Romanians held the country’s biggest protests since its 1989 anti-communist revolution.

The ruling coalition rode out those demonstrations and internal strife, however, and continued to push through controversial changes that it claims will make Romania’s legal code and judiciary more modern and efficient.

On Monday, Mihai Tudose quit as prime minister after losing the support of senior PSD members in his deepening conflict with Mr Dragnea. Last June, a similar scenario saw another PSD premier, Sorin Grindeanu, forced out of office.

Romanian president Klaus Iohannis, a long-time opponent of the PSD, named Viorica Dancila to be the new prime minister.

A close ally of Mr Dragnea, the member of the European Parliament would be Romania’s first female premier if deputies vote in her favour later this month.

“One year after [parliamentary] elections, we already have two failed PSD governments. We obviously need a new government now, to shorten as much as possible the situation of uncertainty,” local media quoted Mr Iohannis as saying.

“I want a fast procedure for the appointment of a new government because this political uncertainty must not degenerate into political instability and, more importantly, I want to prevent possible negative economic consequences of this crisis that appeared once again within the PSD,” he added.

The new government will face widespread public discontent and growing EU scrutiny, amid concern that Romania could be following Hungary and Poland down a reform path that could erode the rule of law and democratic checks and balances.

On Thursday, the Council of Europe’s anti-corruption agency, Greco, added to criticism of how Romania is being run, saying it had fully implemented only two of 13 recommendations made one year ago.