Macron’s European dream on hold as Merkel tends to home 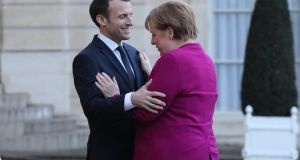 But that rebirth is on hold, a hostage to German domestic politics. As Dr Merkel admitted at a joint press conference, “To act in Europe, it is of capital importance to have a stable government in Germany. ”

Last September, just days after the general election that plunged Germany into limbo, Mr Macron called for a new treaty of the Élysée to replace the one signed by Gen Charles de Gaulle and chancellor Konrad Adenauer on January 22nd, 1963, to cement post-second World War reconciliation between Europe’s two great continental powers.

Instead, the French and German leaders cheerfully dined together and attended a Debussy concert at the Philharmonie de Paris. The French National Assembly and German Bundestag will on Monday approve a joint resolution foreseeing a new treaty that would enshrine the European dimension of the Franco-German relationship.

Dr Merkel must wait for two decisions by the social democratic SPD, at a party conference on Sunday, then a later party-wide vote, before she can construct a coalition similar to the one that governed Germany previously. A coalition between Dr Merkel’s conservative CDU and the SPD would be the most favourable to Mr Macron’s European agenda.

The worst-case scenario for both Mr Macron and Dr Merkel would be for the SPD to reject her offer, in which case new German elections would have to be held. If the liberal FPD or the far right, anti-EU AfD made gains, it could doom Mr Macron’s European dream.

Mr Macron said on Friday he was encouraged by the pro-European tone of the 28-page draft agreement for a CDU-SPD coalition. “It is not up to me to comment on the domestic politics of a friendly, partner country, no matter how close,” he said. “I will limit myself to noting that the exploratory discussions outline a veritable ambition for the European project.”

If a German government is formed, Mr Macron and Dr Merkel hope to reach a joint Franco-German position on reform of the euro zone by March, which they would present to other euro zone members in June.

The CDU-SPD draft agreement addresses banking union and fiscal harmonisation. According to Le Monde newspaper, the idea of a “specific budgetary capacity” for the euro zone is gaining ground among 19 member nations, but there is little consensus on Mr Macron’s proposal for a euro zone finance minister, and his wish for a euro zone parliament appears to be a non-starter.

Mr Macron wants EU members to devote greater financial resources to the union, a measure that Germany is reluctant to adopt.

“Our démarche must not be to look for differences, but to build on convergence,” Mr Macron said. “For me, the priority is to know where we want to go. We have strengthened this Europe that protects. Europe is more sovereign in defence, in the digital, environmental, investment and economic sectors. Each of these has budgetary implications. If we agree on our goals, we will build the mechanisms they depend on.”

Dr Merkel harked back to Mr Macron’s landmark speech at the Sorbonne in September.

“We need a stable Europe that has self-confidence and which gives confidence and satisfaction to her citizens. There is no difference [between us] regarding these ambitions.” Europe needs a common foreign policy and a strong economy, she said. France and Germany would go forward together on harmonising corporation tax.

Because of Dr Merkel’s difficulty in forming a government, and prime minister Theresa May’s predicament over Brexit, Mr Macron is “the lonely leader of Europe”, Le Monde newspaper said.