Official trailer for Armando Iannucci's, The Death of Stalin. 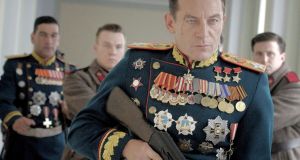 Jason Isaacs in The Death of Stalin

Russia’s culture ministry has withdrawn permission for the release of Armando Iannucci’s black comedy The Death of Stalin, after officials and top arts figures labelled it offensive and extremist.

An advisory committee to the ministry had earlier recommended postponing the release to avoid it clashing with the 75th anniversary of the end of the Battle of Stalingrad, after officials and film directors attended a private viewing on Monday.

“The distribution certificate for the film The Death of Stalin has been withdrawn,” a culture ministry spokeswoman told AFP. The film has been set for a limited release in cinemas from Thursday after local distributors Volga Film gained an 18+ certificate.

Yelena Drapeko, deputy head of the lower house of parliament’s culture committee, told RBK news site she had “never seen anything so disgusting in my life”. “[The audience], me included, saw elements of extremism in the film,” she said.

“It’s an effort to breed bad blood into the social harmony that has been reached in Russian society,” said Ms Drapeko, who earlier in her career was a popular Soviet and Russian actor.

After the preview screening, 21 people signed a letter urging culture minister Vladimir Medinsky to delay the release and check whether the acclaimed film broke any laws. The letter castigated the release for “lampooning the history of our country” and “blackening the memory of our citizens who conquered fascism”, the TASS agency reported.

Portrayed ‘as a fool’

Pavel Pozhigailo, a high-ranking culture committee member, said the film “insults our historic symbols – the Soviet anthem, orders and medals”. He also complained that Marshal Zhukov, the Soviet military commander, “is portrayed as a fool”.

Zhukov, whose statue stands near Red Square, is widely credited with orchestrating the defeat of Nazi Germany at the Battle of Stalingrad in 1943. The battle, in which over 1 million Soviet soldiers died, halted the Nazi advance and was a major turning point in the second World War.

Russia’s Communist party, the second largest party in parliament, has called the film, which revolves around the vicious infighting that followed Stalin’s death in 1953, “a form of psychological pressure against our country”.

Iannucci, its writer and director, is also behind the political satires Veep and The Thick of It.

The development comes shortly after the release of Paddington 2 was postponed by Russia’s culture ministry in an apparent attempt to help two high-profile domestic films at the box office.

The premiere of Paddington 2 was moved at the last minute from January 18th to February 1st to prevent it clashing with the release of Scythian, a historical drama, and Going Vertical, a film about the Soviet basketball team’s surprise Olympic victory over the US in 1972.