Is the new US strategy for Syria an effort to keep the pot boiling? 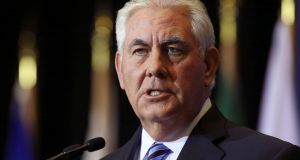 The Syrian government has condemned the US presence in Syria as illegal and an aggression, in response to a US plan to deploy its forces in the country’s northeast indefinitely. The foreign ministry vowed to liberate “every inch of Syrian soil” – a goal backed, so far, by allies Russia and Iran.

In an ill-considered strategy speech on Wednesday, US secretary of state Rex Tillerson revealed the Trump administration would maintain its military presence in the country to prevent Islamic State’s resurgence, press for the ousting of President Bashar al-Assad, and counter Iranian influence.

As the US has only 2,000-plus military personnel in Syria, it was announced that Washington intends to form a 30,000-strong mainly Kurdish border force to secure the 25 per cent of Syria currently occupied by the US-sponsored Kurdish-dominated Syrian Democratic Forces (SDF).

The Kurdish-held area stretches south of the Turkish border to Raqqa, the former Islamic State “capital”, and east to the Euphrates river, and contains Syria’s major oil and gas fields and its main hydroelectricity plant

Since Ankara vehemently objected and threatened to attack the SDF, Tillerson was compelled to deny the border force project. Turkey argues the SDF is an extension of the separatist Turkish Kurdish Workers party which has fought the Turkish army since 1984.

In a rare show of unity, Turkey was backed up by Damascus, Moscow, Tehran and the anti-Assad opposition. They see recruitment of a large force as a means to partition the country. They also reject the Kurds’ demand, supported by the US, for autonomy in the area they hold where at least half the residents are ethnic Arabs, Armenians and Turkmen who resent Kurdish rule.

The Kurdish-held area stretches south of the Turkish border to Raqqa, the former Islamic State “capital”, and east to the Euphrates river, and contains Syria’s major oil and gas fields and its main hydroelectricity plant.

Having refused to join the opposition and having co-operated with the Syrian army in the Islamic State campaign, the Kurds could very well do a deal with Damascus. With that objective in mind, Russia has been pressing for them to participate in negotiations on a political settlement and invited them to the Syrian National Dialogue congress in Sochi on January 30th.

US proxy control of the northeast and its resources is unlikely to force Assad from office. The Syrian army has won the war against the collection of rebel, jihadi and surrogate forces. The army’s remaining tasks consist of eliminating Islamic State remnants, al-Qaeda and its affiliates in northwestern Idlib province, eastern Gouta adjacent to Damascus, and pockets of territory around Deraa in the south.

Damascus governs all of Syria’s major cities, much of its productive countryside, and the coastal strip. Some 80 per cent of Syrians still in the country live in these areas to which refugees are returning from Turkey, Lebanon and Jordan.

The stated US aim is to counter Iranian influence in Syria. However, Tehran is in Syria for the long haul after committing thousands of militiamen, hundreds of advisers, fuel, munitions, and funding for reconstruction. Iran is also the closest ally of neighbouring Iraq, where the George W Bush administration installed a pro-Iranian fundamentalist regime in 2003. In the anti-Islamic State campaign, US forces fought alongside pro-Iranian militiamen.

The unstated US objective is to use its military presence in Syria’s northeast as a counterweight to Russia’s two bases in the west on the Mediterranean coast. However, there is no comparison between a limited number of US special forces and Russia’s expanding , permanent naval and air installations where thousands of personnel are deployed.

Like Tehran, Moscow has pledged to stay on and rebuild Syrian infrastructure. Since Washington cannot match the Moscow-Tehran axis, regional experts argue the administration’s flawed policy is to keep the Syrian pot boiling.