Tsunami warning issued for Alaska and Canada after earthquake

Evacuation orders in place after magnitude 7.9 quake struck the Gulf of Alaska 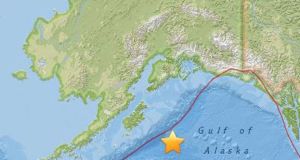 Map shows the location of a magnitude 8.2 earthquake that occurred at a depth of 10 km off Alaska on Tuesday. Photograph: EPA

Alaska and parts of western Canada braced for a possible tsunami on Tuesday after a magnitude-7.9 earthquake struck the Gulf of Alaska, sparking evacuations in coastal Alaska and a tsunami warning for California that was later lifted.

In Alaska, people packed into high schools and other evacuation centres after the quake hit shortly after midnight local time.

Officials had warned residents as far south as San Francisco to be ready to evacuate coastal areas but later lifted tsunami watches for California, Oregon and Washington states as well as coastal British Colombia in Canada.

Hundreds of people packed into the high school in Kodiak, a town of 6,100 people on Alaska’s Kodiak Island, one of the closest settlements to the epicentre. Long lines of traffic formed in coastal communities including Homer and Seward, residents warned on social media.

“Spirits are high. Everyone is doing well here.”

The school stands 164 ft above sea level, said Hecht, who added he was unsure if evacuees would have to spend the night there.

Kodiak police warned at 2:29 am local time that water was receding from the harbour, a precursor to a tsunami.

There were no immediate reports of damage or injury.

The quake, initially measured at magnitude 8.2, struck around 250 km southeast of Chiniak, Alaska at a depth of 25 km at 12:31 am local time, the US Geological Survey said.

“If you are located in this coastal area, move inland to higher ground. Tsunami warnings mean that a tsunami with significant inundation is possible or is already occurring,” the Anchorage Office of Emergency Management said in a warning for Alaska and British Columbia.

An initial tsunami watch for Hawaii was cancelled.

Japan’s meteorological agency said it was monitoring the situation but did not issue a tsunami alert.