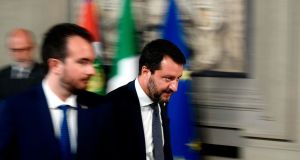 Less than a month ago, Matteo Salvini was in his element, drinking mojitos, DJing and posing for countless selfies at Papeete, his favourite beach club in the seaside resort town of Milano Marittima. He had good reason for his ebullient mood: his far-right League party in Italy was nearing 39 per cent in the polls.

Now Salvini is licking his wounds after a gambit to collapse the government and force snap elections backfired, not only derailing his plans to become prime minister but pushing the League out of power and costing the party about six percentage points in the polls.

In an unusually turbulent period even by the standards of Italian politics, the League’s former coalition partner, the anti-establishment Five Star Movement (M5S), retaliated to being dumped by Salvini by embracing the centre-left Democratic party (PD), traditionally a staunch rival. The two parties are now endeavouring to carve out a new parliamentary majority, led by Giuseppe Conte, who resigned as prime minister last week with a stinging attack on Salvini.

Salvini had envisaged a summer of campaigning along Italy’s southern coast, where he planned to lure voters away from M5S. Instead, as he plunged the country into chaos, many Italians quickly tired of seeing him plastered across the papers, bare-chested and having a good time on the beach.

He has been a highly effective campaigner – the League leapt from 17 per cent in the 2018 general elections to 34 per cent in the European ballot in May this year. But his strategic skills have been less impressive. His first major misstep in recent weeks was failing to foresee M5S and the PD coming together. For now, the League is still Italy’s most popular party, but the M5S and PD are the two largest forces in parliament.

Salvini also had not banked on the mild-mannered Conte, often dismissed as a “puppet” when he was leading the M5S-League alliance, emerging as a rival. Not only did Conte avoid a no-confidence vote demanded by the League by choosing to resign, his blistering attack against Salvini in the Senate last week, when he accused the League leader of being “opportunistic” and “irresponsible”, earned him new fans.

Salvini’s “strongman” narrative also rapidly turned stale when he desperately tried to get back with M5S after realising the error of his ways, only to be snubbed.

Giancarlo Giorgetti, the deputy leader of the League, said this week that the fundamental error of Salvini and the League was winning the European elections.

“With 34% . . . he become public enemy number one, not only in Italy,” Georgetti said. “We’re starting to pay for this success.”

Much of that success was built on the League’s capacity to foment hatred against a number of moving targets including southern Italians, migrants, Muslims, gay people and even Pope Francis. An embittered Salvini is now presenting himself as the victim, saying on Wednesday night that a M5S-PD government would be one founded on “hatred of the League”. He also accused the European Union of plotting to oust the League from government.

Salvini hinted a few weeks ago that he would incite supporters to take to the streets if snap elections were not forthcoming. The smaller far-right party, Brothers of Italy, a League ally, has made similar threats in recent days.

“He might try to stimulate protests over social media as he rails against ‘the robbery of democracy’, but then he will move to attacking the government, waiting for a mistake by the new majority,” said Massimiliano Panarari, a politics professor at Luiss University in Rome.

Salvini also also said that those who fear elections might escape a ballot for “three or six months”, but in the end will have to face a League that was ready to give Italy a “strong and coherent” government. – Guardian