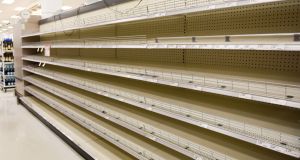 Empty shelves at a Target shop in Hollywood, Florida, as people stock up before the arrival of Hurricane Dorian. Photograph: Bloomberg 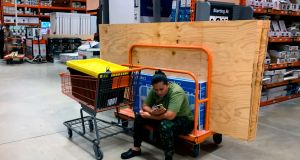 A woman watches her phone while stock up with hurricane supplies at Home Depot in Miami on Thursday. Photograph: Getty Images 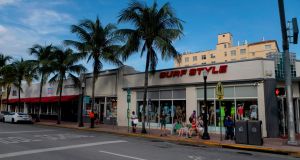 Residents of Florida braced for what could be a historically damaging storm as Hurricane Dorian lingered on Friday in the western Atlantic, building strength in advance of its anticipated landfall early on Tuesday on the state’s east coast.

“It could be an absolute monster,” Donald Trump said in a video address, pledging federal support for local disaster relief efforts.

Florida’s governor, Ron DeSantis, declared a state of emergency for every county in the state and warned of a potential “multi-day” event, but stopped short of declaring any emergency evacuations.

Emergency preparations were under way up and down the Atlantic coast, from Jacksonville in the north to Miami and the Florida Keys, as well as in Orlando and inland areas.

On Friday morning, Dorian was a category two hurricane located north-east of the Bahamas, with maximum sustained winds of 180km/h. Ominously, the storm had developed a distinct eye and slowed its westward progress, meaning it could spend more time over land – and do more damage.

Meteorologists said Dorian could make landfall in Florida on Tuesday as a category four hurricane, with maximum sustained winds of 225 km/h.

“If it makes landfall as a category three or four hurricane, that’s a big deal,” University of Miami hurricane researcher Brian McNoldy told the Associated Press. “A lot of people are going to be affected. A lot of insurance claims.”

Coastal residents were amassing sandbags against potential flooding and tacking plywood over windows and doors. Officials directed residents in the hurricane’s path to check their preparedness plan against advice on the state’s storm emergency web site and to be on guard against price gouging and fraud.

Mr DeSantis announced that highway patrol cars would ride escort for fuel trucks to expedite distribution. “We’re doing all we can on the fuel,” he said.

Earlier predictions of an arrival of the storm early on the Labour Day holiday, Monday, were revised in anticipation of an early Tuesday arrival. Storm surge could be made worse by extreme tides associated with the new moon, which fell on Friday.

A hurricane watch was in effect for the north-western Bahamas, with a risk of life-threatening storm surge and hurricane-force winds. Heavy rainfall and flash flooding were anticipated in all affected areas.

While it was unclear where on the Florida coastline Dorian would make landfall, Mr Trump compared the storm to the 1992 Hurricane Andrew, which likewise tore into Florida along the Atlantic coast, killing 65 and causing an estimated $27 billion in damage.

“It does seem almost certain that it’s hitting dead centre, and that’s not good,” Mr Trump said. “Somebody said bigger, or at least as big as Andrew.”

The major models of the storm showed it most likely deflecting up the Atlantic coast after making landfall but the risk remained, Mr DeSantis said, that the storm could cross Florida and move into the Gulf of Mexico, to potentially grow in strength once again over relatively warm and shallow waters.

“Obviously a storm that cuts across the state, crosses the Gulf and then slams the Panhandle is a bad, bad thing for us,” Mr DeSantis said. “Not every path of the storm has the same probability but you’ve got to be prepared for that. It’s too soon to tell.” – Guardian