Speaking at a meeting of EU foreign affairs ministers in Helsinki, Tánaiste Simon Coveney has said that the UK government is yet to provide a credible alternative to the backstop. Video: EU Commission 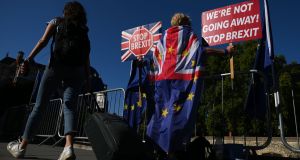 Mr Johnson has promised to take the UK out of the EU on October 31st with or without a transition deal, and has demanded the removal of the existing deal’s “backstop” provision, which the EU wants to ensure an open Border between the Republic and Northern Ireland.

“While I have been encouraged with my discussions with EU leaders over recent weeks that there is a willingness to talk about alternatives to the anti-democratic backstop, it is now time for both sides to step up the tempo,” Mr Johnson said. “The increase in meetings and discussions is necessary if we are to have a chance of agreeing a deal for when we leave on October 31st,” he added.

The news came as British opposition leaders demanded that Mr Johnson reverse his decision to suspend parliament or put it to a Commons vote.

In a rare joint statement, Labour, the SNP, the Liberal Democrats, Plaid Cymru, The Independent Group for Change and the Green Party condemned the prime minister’s move to prorogue parliament for five weeks.

The statement said: “We condemn the undemocratic actions of Boris Johnson following his suspension of parliament until October 14th.

“There is no mandate from the public for a damaging no-deal Brexit. The prime minister is shutting down parliament with the sole aim of stopping MPs from avoiding a no-deal Brexit.”

Conservative rebels are also gearing up for a “last chance” bid to stop Mr Johnson taking Britain out of the EU without a deal, by siding with Labour leader Jeremy Corbyn in a parliamentary showdown with the prime minister.

David Gauke, a former Tory justice secretary who is against a no-deal Brexit, warned that next week could be the “only opportunity” to pass a law to require Mr Johnson to ask the EU to delay the UK’s departure from the bloc beyond October 31st.

This month 21 Conservative MPs signed a letter opposing a no-deal Brexit, but it remains to be seen how many will turn words into deeds by voting against their own government. “I think it will be tight – I don’t think anything is guaranteed,” said Mr Gauke on Thursday.

He argued Mr Johnson’s contentious move to suspend parliament from the second week of September until October 14th means that MPs will have to move quickly when they return from their summer break next Tuesday.

Guto Bebb, former Tory defence minister, urged colleagues to act. “It has never been more essential for Conservatives to take a stand even if that means we have to make it in opposition to the party’s leader,” he said.

Mr Corbyn confirmed on Thursday that he would lead a bid to take control of the House of Commons order paper to allow MPs to pass a Bill requiring Mr Johnson to ask the 27 other EU member states for an extension to the article 50 divorce process.

“We will try to politically stop him on Tuesday,” Mr Corbyn told Sky News. He said he hoped rebel Tory MPs would join Labour and other opposition parties to “legislate to prevent a no-deal exit”.

But the plan is fraught with risk and is by no means certain to succeed.

Getting an anti-no-deal Brexit Bill through all its parliamentary stages before parliament is prorogued in the second week of September will be challenging.

First, John Bercow, the Commons speaker, needs to allow opposition MPs to hold an emergency debate on their planned legislation next Tuesday.

Mr Bercow is likely to grant this debate, given he has called Mr Johnson’s prorogation plan a “constitutional outrage”. The Bill then needs to pass through all its Commons stages next Wednesday.

Although Europhile Conservatives including former chancellor Philip Hammond are likely to back the Bill, some Labour MPs from Leave voting seats could vote with Mr Johnson, suggesting the result could be close.

The bigger problem could come when the Bill moves to the House of Lords. Opposition peers would have to get the Bill through all its stages before the end of the week. A weekend sitting is not excluded.

The opportunities for Conservative peers to kill the Bill by filibustering are considerable. “Peers can table as many amendments to a Bill as they like and they have the right to speak at length on those amendments,” said Maddy Thimont Jack at the Institute for Government, a think tank.

Another problem is that no legislation could ultimately guarantee that article 50 is extended.

Some Tory MPs fear Mr Johnson would ignore the law and refuse to seek the article 50 extension, forcing them to mount a legal challenge in the days running up to October 31st.

Alternatively Mr Johnson could respond to such legislation by telling the EU that Britain will adopt an aggressive policy of non-co-operation in the longer period of EU membership, including on a future budget for the bloc. This could encourage the EU27 to refuse an article 50 extension at a summit on October 17th.

Mr Corbyn said he was holding back the option of tabling a no-confidence vote in the government – which could lead to him becoming leader of a caretaker administration to delay Brexit – until “the appropriate moment”.

Tory rebels have indicated that they are not ready at this stage to try to topple Mr Johnson, although it remains an option for late October.

Shadow chancellor John McDonnell acknowledged that MPs only had a handful of days in parliament in which to secure approval for the legislation to try to stop a no-deal Brexit. “It’s an incredibly tight timescale, we have to accept that,” he said.

Mr McDonnell predicted that Downing Street would try to thwart opposition parties through a series of “bizarre” parliamentary mechanisms.

One person close to the efforts to pass the legislation against a no-deal Brexit said: “We believe it can be done – our Achilles heel is the extent to which we have a ruthless, uncompliant government prepared to thwart what we want to do.”

George Young, the pro-EU Tory grandee, quit as Conservative chief whip in the Lords on Thursday in protest at Mr Johnson’s prorogation plan, saying it risked “undermining the fundamental role of parliament at a critical time of our history”.

But Jacob Rees-Mogg, leader of the Commons, told the BBC the backlash against the plan was a “candyfloss of outrage”, given that MPs would normally have a three-week recess for the party conference season in September and early October. – Copyright The Financial Times Limited 2019/Additional reporting: Agencies