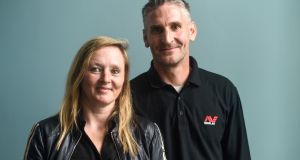 Lisa Grace and her partner Adam Staples pose for a portrait at the British Museum on Wednesday in London, England. Photograph: Peter Summers/Getty Images

Two metal detectorists have told of their shock at unearthing a hoard of coins depicting William the Conqueror thought to be worth over £5 million (€5.5 million).

The hoard shines fresh light on the aftermath of the Norman invasion and shows evidence of early tax evasion in Britain.

Mr Staples (43) and his girlfriend, were training friends to use their metal detectors on a weekend trip when they made the discovery at an undisclosed location.

“We went down for a weekend and hit the jackpot,” he said.

“We didn’t leave the site until we thought we’d got all the coins.

“We had a massive thunder and rainstorm. We were soaking wet by the time we finished.”

Ms Grace joked: “It was like the gods didn’t want to disturb the hoard . . . We were wet through but it really didn’t seem to matter.”

Coins from around 1066 depicting both the defeated King Harold II as well as triumphant conqueror William I were found in a field in the Chew Valley.

The pair, from Derby, first started their hobby around 16 years ago and have uncovered valuable items before, but nothing quite like this.

Describing the moment the first coin was revealed, Mr Staples said: “It went from one coin, three coins, 30 coins and gradually progressed. It took about four, five hours to dig it up.”

Mr Staples, who works providing auction consultations, said life for the pair would “totally change” if, as expected, the hoard is declared treasure by a coroner.

“We will be able to buy our own property, it’s freedom,” he said, but added that they had not been metal detecting for “financial gain”.

While it has not yet been officially valued, Mr Staples said the coins could be worth more than £5 million — a sum which would be shared with the rest of the group and the landowner.

He said of the find made earlier this year: “We found them on the Saturday. They stayed in the bucket, uncounted, with the soil remains to try to get an archaeologist out to try and examine them.

“When that didn’t happen by Monday we thought we better do something about this. We counted them out . . . and drove them to the British Museum.

“They opened the gates for us and cleared the crowds!”

Coins in the 1,000-year-old hoard show signs of being illicitly tampered with, sporting mixed designs on either side.

Experts say this is evidence that the person striking the coins was avoiding paying a fee to obtain an up-to-date design.

Gareth Williams, a curator at the British Museum, said that making false coinage risked a severe penalty — having a hand cut off — at the time.

“We can see from these coins that that wasn’t a deterrent”, he added.

Evidence showed that whoever buried the hoard was “involved in some way in the Battle of Hastings”, he said.

The hoard would have bought a flock of more than 500 sheep and so have belonged to “someone relatively wealthy”.

That person “may or not” have come to an unpleasant end, he said.

“It may even be that it was buried under a tree to mark the spot and the tree blows down in the storm and the person can’t find it there,” he added.

The hoard is the largest Norman treasure find since 1833.–PA