Berlin Letter: What is striking about arrival of 1.2m people is not what failed, but how much worked 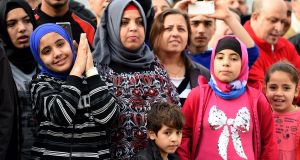 Young migrants wait for the arrival of the German president at an accommodation for refugees in Bergisch Gladbach, western Germany on November 12th, 2015. Photograph: Patrik Stollarz/AFP via Getty

Exactly five years ago, Angela Merkel uttered three words that will define her legacy more than all the millions of other words in her 15-year chancellorship.

It was the peak of the refugee crisis that would bring about 1.2 million people into the country. The German leader, sensing the mood was darkening, insisted at a press conference: “We have managed so much, we’ll manage this . . . and where something stands in our way, it must be overcome.”

Many applauded Merkel’s “we’ll manage this” exhortation as a demonstration of pragmatic, moral leadership; others were provoked and felt railroaded into accepting mass immigration.

The people continued to arrive and Germany, alongside Austria and Sweden, took in more than its share of desperate people while other EU neighbours averted their gaze.

Today, there is a widespread reticence to acknowledge what was achieved. Some blame deep German reserves of self-doubt. Others point to the rude awakening that followed the initial naive euphoria. Among the grateful families welcomed with water and soft toys at Munich train station, people soon realised, were also some opportunists and Islamist extremists who wasted no time carrying out shocking attacks.

On New Year’s Eve 2015-2016 in Cologne, more than 1,000 women reported being harassed, and physically and sexually assaulted, by groups of young immigrant men, including asylum seekers.

The final, terrible insult came a year later when a failed asylum seeker from Tunisia crashed a stolen truck into a Berlin Christmas market, killing 12.

Perhaps it is these last years of wearying immigration rows that have clouded memories of just how deeply people here were affected by the sights of 2015.

For months, columns of tired, dusty people shuffled across one European border after another, eyes fixed on Germany as the country with everything they no longer had in Syria or Afghanistan: peace, prosperity and prospects.

For many eastern Germans the refugee crisis triggered memories of 1989: a holiday in Hungary to flit across the newly-opened border to Austria; squatting in Bonn’s embassy in Prague until, with emotional cheers, they heard they had been granted passage to West Germany.

Among older generations, who survived the mass post-war expulsion of ethnic Germans from now Czech and Polish territories, there was a moving familiarity in seeing families walk west with nothing but the hope someone would give them a fresh start.

Even in cities like Berlin, which fumbled badly to set up structures to process the waves of new arrivals, what is striking in hindsight is not what failed but how much worked. German society absorbed 1.2 million people and kept going.

Despite the AfD’s best efforts to claim otherwise and demonise new arrivals, recent studies suggest the migration crisis glass is more than half full.

One by the Institute for Employment Research (IAB) suggested Germany learned a lot from the 1990s Balkan war refugee wave and, in 2015, moved quickly to invest in language and other integration measures.

Five years after the Balkan refugees arrived, just 44 per cent had been employed; of the most recent arrivals, 68 per cent have full or part-time employment, while 17 per cent are in paid traineeships.

Talk to German employers of new arrivals and the overall mood towards what happened in 2015 is quiet pride.

“We had some language problems at the start, training in people from other professions,” said Manfred Hölzl, a restaurant owner in the southern city of Konstanz and a city councillor there. “But there was a huge will to help, volunteers just showed up to help with refugee accommodation, and that goodwill went right through the society.”

Recent polls suggest the AfD’s anti-immigrant message is no longer the political draw it once was. But another shadow is stealing across Germany’s refugee success story: the Covid-19 pandemic.

Many new arrivals, as the last in companies, now find themselves the first out the door as struggling firms downsize.

While others argue about the legacy of 2015, young new arrivals are getting on with their lives. A report by the DIW economic think tank found that 90 per cent of 12-year-olds from refugee families say they speak German with their friends, while 80 per cent feel good at school.

Awarding the equivalent of Leaving Certificate diplomas at a Berlin secondary school recently, federal family minister Franziska Giffey singled out for praise five students who hadn’t a word of German in 2015 – but now achieved top grades.

“What an unbelievable chance and boost for Germany,” she said. “This will work for us and result in great things.”