Schools across the country are set to reopen after months of lockdown, but fears of outbreaks and coughing students have left many staff members anxious about what lies ahead. Video: Enda O'Dowd 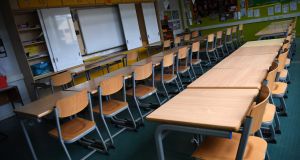 Secondary school pupils have “critical concerns” over the implementation of guidelines aimed at safely reopening schools from next week, according to a students’ union.

In a letter to Minister for Education Norma Foley, the Irish Second-Level Students’ Union (ISSU) has requested clarification on what it says are unanswered questions regarding school reopenings.

It wants to see any official guidance which outlines the rationale for allowing different social distancing rules in schools compared with wider society.

The union has also questioned how students with medical problems can be expected to travel to school and attend classes.

In addition, it also called for the publication of a threshold number of coronavirus cases which will determine when schools need to close on a local or national basis.

This was particularly important, it said, as a full school closure was mandated on March 13th last with 70 cases confirmed nationally, a significantly lower figure than the newly confirmed cases over the last two weeks.

Guidance is also needed on the steps to follow for the continuity of teaching and learning in the event of a closure, according to the union.

“Students, families, teachers and all in the school community recognise the necessity to return to school and want to return to education, having been out of the classroom since early March,” according to the letter from ISSU president Reuban Murray.

“However, this requires clearer communications on the health and safety protocols expected within schools. To ensure an effective transition in the reopening of schools it is pivotal that guidance and clarification is provided on . . . areas of concern.”

The union also says students should have the right to stop a class if there are breaches of safety guidelines.

It says that if there is evidence of breaches in physical distancing or other guidelines, students should be entitled to bring this to the attention of the class teacher or a Covid-liaison staff member.

The class should not resume until it is safe for all students and teachers present, the union asserts.

“The challenges faced by students are multifaceted in the return to education. Clarification is needed on the concerns aforementioned in order to prioritise the welfare of students and ensure that no student is left behind due to circumstances outside of their control,” it adds.

The union also has concerns over education for vulnerable students with compromised immune systems.

“These students must be facilitated in receiving meaningful, proactive online tuition if unable to return to school. The ISSU is calling for the department to develop a national framework of how this online tuition should be provided,” the letter states.

“The discrepancies of the digital divide resulted in varied education received during school closures. This must not become a barrier should online tuition be the only viable option again under possible future restrictions.”

Meanwhile, Sinn Féin has said that students who are unable to work and save for college over the summer due to Covid-19 could face “a year on Dole queues” without Government support.

Rose Conway-Walsh TD, the party spokeswoman for higher education, said there was a “danger” greater numbers would be forced to drop out of third-level education, due to financial pressures.

Inadequate supports from the SUSI college grant and loss of income due to the coronavirus pandemic would create a “perfect storm” of uncertainty for students looking to start college next month, she said.

This year many students have been unable to take up traditional temporary summer jobs in the service and hospitality industry to allow them to save up for the coming academic year, due to Covid-19.

“It’s a problem for all of us as a society if we’re going to have so many students dropping out of college because they can’t afford to go,” Ms Conway-Walsh said. “We are looking at a situation where you have a lost year, or maybe even a lost generation in that sense,” the Mayo TD said.

Failure to put extra financial supports in place for students would result in “these young people on the Dole queues for a year,” she said.

The cost of increasing the SUSI grant paid to students in lower-income households attending third-level by 10 per cent would be €16.4 million, she said.

“My concern is the Government don’t seem to be treating this as something that is really urgent,” she said.