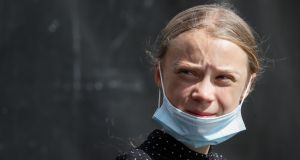 Greta Thunberg: Everyone has “a duty as a democratic citizen to be involved, to get engaged”. Photograph: Hayoung Jeon/EPA

After meeting the German leader in Berlin, Ms Thunberg said decisive action on the Covid-19 pandemic had shown what the global community was capable of in crisis – but also flagged ongoing denial that climate change is a crisis requiring similar action.

“It’s like we are stuck in a hamster wheel, everyone is blaming each other and unless . . . someone breaks that cycle we won’t be able to get anywhere,” said Ms Thunberg.

The Swedish teenager said the German leader was “nice, very friendly” but that everyone – not just politicians – have “a duty as a democratic citizen to be involved, to get engaged”.

The meeting follows an open letter from Ms Thunberg and three other climate activists. It pointed out that, even if the world meets existing emissions reduction goals, the planet still faces a drastic temperature rise of at least 3-4 degrees.

Without going into detail, campaigners discussed with Dr Merkel a demand in their letter for a “new system”. Campaigners want a mechanism to allow states withdraw from new coal plants currently being planned around the world. Allowing them go ahead, said Ms Thunberg, would see a 120 per cent increase in fossil fuel emissions beyond those envisioned in the 1.5 degree target.

“The people in power today have so far practically already given up on the possibility of handing over a decent future for coming generations,” the letter said. “They have given up without even trying.”

Without going into detail, talks on Thursday touched on a demand in their letter for a “new system”. Ms Thunberg said one proposal would allow states to withdraw from valid contracts for new energy production facilities.

At the press conference activists announced September 25th as the next Fridays for Future strike day. Grassroots groups around the world will decide closer to the date, based on the local pandemic situation, whether restrictions will make street demonstrations possible.

Two years after they began their work, German activist Luisa Neubauer said climate campaigners were more aware than ever of the complexity of balancing the interests of current and future generations.

As a trained scientist and politician, she said Dr Merkel – who retires in a year’s time – understands the need to “fill the gap” between the two spheres.