Caveat: Contrast the controversy here with the calm acceptance of a pool party in China 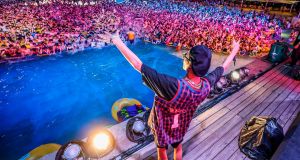 The pool party and music festival at Maya Beach water park in Wuhan, China last Saturday, which was attended by 15,000 people. Photograph: STR/AFP via Getty Images

While Ireland blew its head gasket this week over a boisterous brunch party attended by 51 young people in Berlin/D2 bar in Dublin, in Wuhan they held a pool party for 15,000.

Wuhan is the Chinese city where it is accepted that the new coronavirus was spawned. It was Wuhan residents who first experienced what is now known ubiquitously as “lockdown” from January to March. The Chinese take the word a bit more literally than we do in the West, however. Some Wuhan residents were welded into their apartment blocks to prevent them leaving.

This week, thousands of young people from the city of 11 million people crowded into the Wuhan Maya Beach water park for a pool party and club music festival. The pictures were like something from a different age: young people wedged together without fear, sliding off inflatables into swimming pools, screaming and dancing to a live DJ. It looked heavenly.

It feels slightly surreal, over on this side of the world, to experience a sense of optimism due to a Chinese pool and club night

There was no intervention by the local authorities, who wouldn’t hesitate to step in if there was any official disapproval. Wuhan has had no new locally transmitted cases of the virus since the middle of May. Chinese state-controlled media rebuffed the ripples of international criticism over the party by dismissing it as “sour grapes”. Clearly, an official decision was taken within China’s autocracy to let Wuhan’s young people breathe for a bit.

When Wuhan’s traumatised residents emerged blinking into the daylight from their horrific lockdown in March – just as we were settling down to begin ours – they surely felt the same fear and trepidation that has recently stalked our attempts at economic and social reopening. After a month, they had an inevitable and modest resurgence of the virus, as we have. But the city that pioneered the modern “lockdown” technique did not repeat it.

Instead, the Chinese decided to go hunting for the virus rather than sitting back and waiting for it to get them again. They tested close to 10 million people in late May – almost the entire city of Wuhan. These were proper diagnostic tests to find the infected in real time, and not simpler, historical antibody tests. It took just 19 days to complete. They found a few hundred asymptomatic cases, which were isolated and dealt with, with no further spread. The city returned to virtually normal life, and this week had its pool party.

It feels slightly surreal, over on this side of the world, to experience a sense of optimism due to a Chinese pool and club night. But it shows that, even in the pandemic’s ground zero, where people were left to die alone in corridors at the height of the crisis, life’s vim cannot be extinguished and it can even come rushing back if public authorities do their jobs properly.

The scenes last weekend at restaurateur and publican Jay Bourke’s Berlin bar in Dublin ought to be seen through the proper prism: the anxiety of others. The footage shared widely on social media of a staff member standing on a bar and pouring whiskey into a handful of customers’ mouths was insulting to other businesses and citizens, especially with virus numbers creeping up again.

The imagery it evoked was debauched, almost pornographic in its symbolism, and I would wager that this contributed to it going viral

It stoked fear among older people who are nervous that death will stalk them again due to the negligence of others. To have a reasonable fear of death must be very emotionally debilitating, and something that those of us who are much younger naturally struggle to grasp. Our brains are not wired that way. Not yet.

Social media, predictably, blew up over the Berlin bar footage. Politicians and doctors and commentators all weighed in. But with community transmission still rare in Dublin, rather than a virus super-spreading event, it is much more likely that the Berlin bar scenes are really more of a media event.

All the ingredients were there: raucous footage to entertain and provoke rage; a simple narrative (stupid, selfish young people) that was easy for the rest of us to contrast with our own perceived sense of responsibility, thus giving us personal validation; and a recognisable villain – Bourke.

The barman-on-the-bar footage launched the Berlin story on social media. There was something arresting about the scenes of a man standing over punters – some of them young women – and pouring liquid into their open mouths as they closed their eyes and tried to catch the drops. The imagery it evoked was debauched, almost pornographic in its symbolism, and I would wager that this contributed to it going viral.

The fact that the background music was from a band called The Killers added to the sense of abandon.

But it was Bourke’s involvement as proprietor that further fuelled the story in traditional media. In a small, Irish media bubble kind of way, Bourke is box-office. He has been involved in many scrapes and controversies over the years, which were slavishly reported by newspaper journalists, including yours truly. He is articulate and even a little bit vain, which draws media towards him. And he is undeniably complex and interesting: he has a talent for trendy bar concepts, and an equal gift for attracting mither.

Holding a “baked brunch” event in the middle of a pandemic was a stupid thing for a businessman to do. It was a disservice to others in the industry who are pushing for greater leeway to trade. But let’s not blow it up out of all proportion. Much of the reaction is just a symptom of our own fears and anxiety, because nobody knows where the virus is hiding.

So how do we combat that? We can step back onto a carousel of mini-lockdowns, recurring restrictions that wax and wane with infection rates, and a whack-a-mole dance with outbreaks, at least until there are effective treatments and vaccines widely available.

Another option is to do what the Chinese did in Wuhan, the cradle of this killer virus, and hunt it down.

If we know where the virus is hiding – meat factories, direct provision centres, certain communities – it ought to be possible to root it out. Our medical and political establishment seems ambivalent about the efficacy of mass testing. But remember, it wasn’t so long ago that they were ambivalent about wearing masks.

Many respected scientists, such as Trinity’s Tomás Ryan, and doctors, such as the Mater hospital’s Jack Lambert, have argued repeatedly that the State’s baffling inability or unwillingness to build world-class, proactive testing and tracing infrastructure is holding us back.

I would like to hear NPHET and the Government explain properly why Ireland isn’t getting ahead by building a mass testing programme. Perhaps it is easier to join a pile-on of young people in a bar than it is to summon the resources and the will to invest in mass testing and tracing.

And if they say it won’t work, it is reasonable to retort that they can do it abroad, and it worked there. We are often told that we must ape the strict restrictions of other successful countries. That logic should also apply to testing and tracing.

Technology really can be stranger than fiction at times 05:30
Chris Horn: Board tips for start-up chief executives 05:29
Davy board to search for other potential cases of wrongdoing 05:23
Davy bows to Government pressure with statement 05:05
Belfast haircare brand We Are Paradoxx raises £3m 05:01

4 Davy board to search for other potential cases of wrongdoing

8 Amazon moves from film industry’s margins to the mainstream