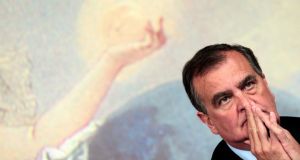 A senator from Italy’s far-right League has been given an 18-month prison sentence for likening the country’s first black minister to an “orangutan”.

Roberto Calderoli said during a party rally in July 2013 that whenever he saw pictures of Cécile Kyenge, an MEP who at the time was integration minister, “I cannot but think of the features of an orangutan”.

Calderoli argued that his comments against Ms Kyenge, who moved to Italy from the Democratic Republic of the Congo, in 1983 to study medicine, were just “playful banter”.

A court in Bergamo, northern Italy, found him guilty of defamation aggravated by racial hatred. But it is not certain whether he will serve any prison time – the sentence will only become definitive once a process of two appeals has been exhausted, and terms of less than two years are usually suspended.

Still, Ms Kyenge said the verdict was a crucial result, especially at a time when racism was on the rise.

“It’s a very important signal,” she told the Guardian. “It means there are still judges who manage to keep watch over the political and public scene, and shows they are also trying to speak in the name of respect and dignity for people [who suffer racist attacks] and for fundamental rights. Words are weighty, and when they come from a politician, they risk having a very negative impact.”

It was among the most high-profile racist attacks against Ms Kyenge during her time in Enrico Letta’s government. She also had bananas thrown at her during political events and repeatedly faced insults and slurs from politicians, the majority of whom were from the League but also from the Brothers of Italy, a smaller far-right party.

In 2017, Mario Borghezio, a League MEP, was ordered to pay €50,000 for describing Mr Letta’s administration as the “bongo-bongo government” upon Ms Kyenge’s appointment. Ms Kyenge is pursuing legal cases against nine other politicians.

Matteo Salvini, the leader of the League and interior minister, is suing Ms Kyenge for defamation after she called the party racist. A second hearing is scheduled for March 29th at a court in Piacenza. – Guardian