Frenchman on trial for first murders committed by Isis in Europe 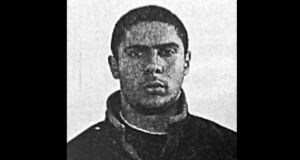 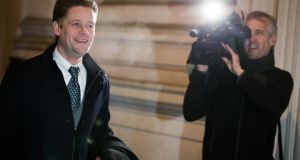 Henri Laquay, lawyer Nemmouche, arrives ahead of the constitution of the jury for the trial in Brussels on January 7th Photograph: Benoit Doppagne/Belga/AFP/Getty

The trial of Mehdi Nemmouche, the French jihadist accused of murdering four people in the Jewish Museum in Brussels on May 24th 2014, will begin on Thursday in Brussels.

The shooting deaths of an Israeli couple, a French volunteer and a receptionist at the museum were the first atrocity by Islamic State in Europe.

The terror group, also known as Isis, has since claimed responsibility for 22 attacks in the EU that killed 333 people and wounded 1,490 others.

Nemmouche and a French codefendant, Nacer Bendrer, who is accused of providing weapons used by Nemmouche, claim to be innocent.

Nemmouche says he spent 2013-14 in Syria helping children wounded in the war there. His version is undermined by the testimony of four former French hostages who describe him as their cruellest jailer.

Other evidence against Nemmouche includes a 24-minute telephone conversation with Abdelhamid Abaaoud, the mastermind of the November 13th, 2016, Bataclan massacre that killed 130 people in Paris, and a conversation with a fellow prisoner in September 2014.

“Nemmouche said, laughing, that he was happy because there were ‘four fewer Jews on earth and they’d all been sent in a coffin to Israel’ ,” prison officials reported.

Nemmouche is likely to face a second trial in Paris, where he has been charged with hostage-taking and the sequestration of French journalists.

Édouard Élias, Didier François, Nicolas Hénin and Pierre Torrès are scheduled to testify on February 7th. They were held in the basement of the Aleppo eye hospital in 2013.

Nemmouche made no attempt to hide his identity from his French captives. They say he beat them, threatened to slash their throats and filmed them with his smartphone when they went to the toilet.

They also say he knocked one hostage out with chloroform, then told his cellmate, “Your buddy is dead. I killed him with a knife! I’m going to cut your head off and put it on his ass.”

Another time, it is alleged, he forced a hostage to kneel and held a sword to his throat.

“He told us he led operations in Shia villages in Syria, that he raped women in front of men, then ‘smoked’ the men and came back with a truck to loot the houses, that he ate the food he found in their fridges,” a former hostage told investigators, according to transcripts obtained by the investigative website Mediapart.

A documentary broadcast by the Belgian network RTBFon Wednesday night told the story of Nemmouche’s life. He was born in the northeastern French town of Roubaix.

His mother, of Algerian origin, was repeatedly treated for mental illness. His father was absent. Nemmouche was placed in a foster home.

A foster mother called Nicole told RTBF that Nemmouche was “very sensitive, intelligent and promising” until his grandparents demanded the right to custody on weekends when he was nine-years-old.

Nemmouche’s foster parents were raising him as a Catholic. His blood relatives were Muslim, and the child was confused. “I am nobody,” he repeated often. He left his foster family at age 16 and became a petty criminal, serving five years in prison for the armed robbery of a convenience store.

In prison, Nemmouche began wearing a beard and djellaba robe. He was placed in solitary confinement to prevent him proseltyising, after he used a loudspeaker to call prisoners to prayer.

Nemmouche’s case has laid bare the inadequacies of the anti-terrorist system in France. Five days before he was released in December 2012, the prison alerted French intelligence that “we think this prisoner may commit terrorist actions and is psychologically unstable”.

He was freed nonetheless, was not kept under surveillance, and left for Syria three weeks later.

The Belgian authorities who organised Nemmouche’s trial learned of his confession of responsibility for the murders, made to a fellow prisoner in France, through an article on the Mediapart website.

After the murders in Brussels, Nemmouche travelled by coach to Marseille, clean-shaven and wearing a suit and tie. During a routine check in the Marseille bus station, customs officers found the revolver and assault rifle used in the killings, and 312 unused bullets, in Nemmouche’s sports bag.

Nemmouche’s lawyers will claim that the killings were in fact an assassination of the Israeli couple, carried out by Israeli intelligence, Mediapart reported.