Labour MP may have to delay Caesarean to cast Brexit vote 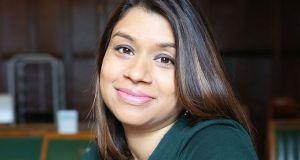 John Bercow has told parliament the Labour MP Tulip Siddiq should be allowed to have a proxy for the Brexit vote on Tuesday so she does not have to delay having a baby by Caesarean section in order to get to Westminster.

The Speaker of the House of Commons said it was time “reactionary forces” were overcome and demanded Conservative and Labour whips introduce the proxy system immediately so Ms Siddiq does not have to go through the division lobby in a wheelchair.

But there was no immediate sign of progress and it is understood Ms Siddiq, who is heavily pregnant, will travel to Westminster to vote in the Brexit debate after delaying a planned Caesarean by two days.

Responding to a point of order raised by Harriet Harman, Mr Bercow called on Andrea Leadsom, the leader of the Commons, and the whips in both main parties to act immediately to agree a proxy vote for Ms Siddiq.

The speaker said “the notion that an MP would have to be pushed through the division lobby in a wheelchair is completely uncivilised” and repeatedly described the situation as “lamentable”.

Ms Harman said Ms Siddiq should not have “to choose between going through the division lobby in a wheelchair nine months pregnant having postponed her caesarean or losing her right to vote”.

Earlier, Ms Siddiq told the Evening Standard she intended to vote in person: “If my son enters the world even one day later than the doctors advised, but it’s a world with a better chance of a strong relationship between Britain and Europe, then that’s worth fighting for.”

It would be the first time an MP has been allowed to have another person vote on their behalf so they do not have to travel to Westminster in order to be counted, and make good on a promise agreed in a Commons debate in February last year.

Those unable to make it through the division lobbies have traditionally had to get on to the parliamentary estate – in an ambulance if necessary – in order to be “nodded through”, although that only applies if whips from both sides agree.

Otherwise, MPs have to make their way through the division lobbies in person. On Monday night, aides said Ms Siddiq had asked to ensure she could be driven to Westminster and a wheelchair would be made available so she could vote.

Relations between Conservative and Labour whips have deteriorated in the past year, with claims the government resorted to dirty tricks and playing hardball in order to win key votes.

The Labour backbencher Naz Shah was pushed through the division lobby in a wheelchair while wearing pyjamas last June, at a time when she was recovering from a serious illness, because the Conservatives refused to allow her to be nodded through.

Brandon Lewis, the Conservative chairman, controversially voted in two knife-edge Brexit votes last July when he was supposed to abstain to honour an agreed pairing with the Liberal Democrat MP Jo Swinson, who was on maternity leave at the time.

Ms Siddiq told the Standard: “If the pairing system is not honoured, there’s nothing I can do, and it’s going to be a very close vote. I’ve had no pressure at all from the whips to come and vote, but this is the biggest vote of my lifetime.”- Guardian