US president Donald Trump said during an interview with right-leaning news network Fox News on his visit to the Texas border with Mexico, that he is likely to declare a national emergency. Video: Hannity/Fox News 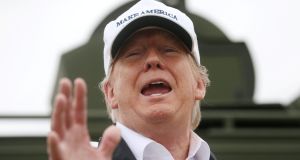 US president Donald Trump talks to reporters as he visits the banks of the Rio Grande River during the president’s visit to the US-Mexico border. Photograph: Leah Millis/AP

Thousands of government employees across the United States will not receive their pay cheques on Friday, as the ongoing government shutdown approaches the end of its third week.

Many workers were due to be paid by the government on Friday, but they are not expected to receive remuneration for their work. Federal workers took to the streets of Washington on Thursday to protest against the ongoing shutdown, which has affected about 800,000 workers, many of them based in the greater Washington DC area.

In the latest sign that the shutdown might continue for some time, Mr Trump announced on Twitter that he would not attend the World Economic Forum at Davos, which begins on January 21st, “because of the Democrats intransigence on Border Security and the great importance of Safety for our Nation”.

He also appeared to backtrack on claims that Mexico would pay for a border wall with the United States.

“I never said this and I never meant they’re going to write out a cheque. I said, ‘They’re going to pay for it.’ They are. They are paying for it with the incredible deal we made, called the United States, Mexico, and Canada (USMCA) deal. It’s a trade deal. It has to be approved by Congress. It probably will be.”

With no further negotiations scheduled between the White House and Democrats on the shutdown after Mr Trump walked out of a meeting with Democrats on Wednesday, it looked increasingly likely that Mr Trump would declare a national emergency, a move that would allow him to tap the Department of Defense for funds but would almost certainly face immediate legal challenges.  The president again suggested on Thursday that he was prepared to invoke emergency powers if needed. “I have the absolute right to declare a national emergency. The lawyers have so advised me. I’m not prepared to do that yet. But if I have to, I will. I have no doubt about it – I will.”

Meanwhile on Capitol Hill, Democrats attempted to pass several individual Bills aimed at reopening certain government departments, which did not secure sufficient support in Congress, as predicted. Senate majority leader Mitch McConnell said the gesture by Democrats was “pointless”, as the president would refuse to sign the Bills. “This will not produce a result,” he said. “It won’t solve the problem because the president has made clear he won’t sign them.”

Vice-president Mike Pence spent much of the day on Capitol Hill meeting senate Republicans, but there was little evidence the impasse would be resolved.

House speaker Nancy Pelosi also indicated she would not back down, telling journalists that the border wall “is not the best way to protect our borders”. She also claimed that the president, who is demanding $5.7 billion in funding for the border wall, “loves the distraction that this is from his other problems”.