No-deal Brexit would make a united Ireland more likely – May

The day before British Prime Minister Theresa May's meaningful vote on Brexit, she pleas to MPs to help pass her deal, which looks set to be voted down. Video: Parliament TV 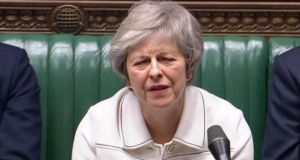 Prime minister Theresa May told MPs that history would judge them harshly if they failed to deliver on the result of the 2016 referendum. Photograph: PA Wire

A no-deal Brexit would make a united Ireland and the break-up of the United Kingdom more likely, Theresa May has told MPs ahead of Tuesday’s vote on the deal she has negotiated with the European Union.

The prime minister acknowledged that the fresh assurances she received from the EU on Monday would not satisfy those who wanted Britain to be able to leave the Northern Ireland backstop unilaterally.

She said the EU would not agree to such a mechanism or to a date on which the backstop should expire but she said that rejecting the backstop meant leaving the EU without a deal.

“Whatever version of the future relationship you might want to see – from Norway to Canada to any number of variations – all of them require a withdrawal agreement and any withdrawal agreement will contain the backstop. And that is not going to change however the House votes tomorrow,” she told the House of Commons.

“And to those who think we should reject this deal in favour of no deal, because we cannot get every assurance we want, I ask what would a no-deal Brexit do to strengthen the hand of those campaigning for Scottish independence – or indeed those demanding a border poll in Northern Ireland? Surely this is the real threat to our union.”

Facing almost certain defeat on Tuesday night, Mrs May asked MPs to take a second look at her Brexit deal, telling them that history would judge them harshly if they failed to deliver on the result of the 2016 referendum.

DUP deputy leader Nigel Dodds said that nothing in the deal had changed because she had failed to achieve legally binding changes to the withdrawal agreement.

Former Conservative Northern Ireland secretary Owen Paterson said it was “extraordinary and exasperating” that the backstop should be an issue given that nobody would build a hard border. The prime minister said he was mistaken.

Labour leader Jeremy Corbyn said Monday’s letter from Jean-Claude Juncker and Donald Tusk meant nothing and accused the prime minister of trying to blame others for her failure to secure a better deal. He said MPs should ignore her warnings that they would undermine public faith in democracy if they rejected her deal.

“I can think of no greater example of democracy in action than for this House to reject a deal that is clearly bad for Britain. During the past two years of these shambolic negotiations the prime minister has failed to listen,” he said.

“She hasn’t once tried to work with parliament to construct a Brexit deal this House and the country can support. And now she is left facing a humiliating defeat. She is blaming everybody else but herself.”

Addressing Labour MPs later, Mr Corbyn predicted that Mrs May’s deal would be defeated and suggested he would move quickly to table a motion of no confidence in the government.