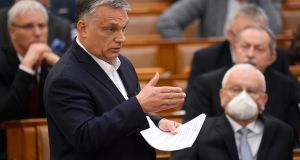 Rights groups and press freedom watchdogs have warned that a bid by Hungary’s nationalist government to assume extraordinary powers to fight the coronavirus crisis threatens the nation’s democracy and rule of law.

The Bill debated in parliament on Monday would allow populist prime minister Viktor Orban’s government to rule by decree under a current state of emergency that it could extend indefinitely, without recourse to parliament, if the Covid-19 outbreak made it impossible to gather a quorum of deputies.

It would also introduce a jail term of up to five years for anyone found guilty of spreading false information that caused public alarm or hampered efforts to contain the pandemic, and up to eight years for breaking isolation or quarantine rules.

“The more we co-operate, the more lives we will be able to save. We are facing a task that nobody could tackle alone,” Mr Orban said on Monday before an initial vote on the Bill. “Every one of us has a responsibility . . . Rather than divisions and disputes, the time has come to work together.”

He failed to persuade the required four-fifths of deputies to back the Bill in an accelerated procedure, however, so it is expected to return to parliament next week, when the ruling coalition’s two-thirds majority would be enough to turn it into law.

“While many countries are taking extraordinary measures to deal with the virus, the Hungarian draft Bill, failing to justify each of its measures as strictly necessary to address a public health emergency and only that, offers the spectre of a power grab,” said Lydia Gall, senior researcher in the region for Human Rights Watch.

“Parliament should block this law to safeguard democracy, or else Hungary is likely to bear the consequences for many years to come, even when the pandemic recedes.”

Dunja Mijatovic, human rights commissioner for the 47-state Council of Europe, warned that the Bill “would grant sweeping powers to the government to rule by decree without a clear cut-off date and safeguards. Even in an emergency, it is necessary to observe the constitution, ensure parliamentary and judicial scrutiny and [the] right to information.”

Scott Griffen, deputy director of the Vienna-based International Press Institute, said that “rather than working together with media to manage the crisis for the benefit of all citizens, the Orban government is exploiting the opportunity of emergency rule to tighten its grip on the country’s public institutions and the flow of news and information.”

The EU has clashed repeatedly with Mr Orban over his “illiberal” reforms in Hungary, where 167 Covid-19 cases and seven deaths from the virus have been confirmed.

Government spokesman Zoltan Kovacs described much criticism of the Bill as “biased and irresponsible”.