US willingness to declassify missile footage queried in Dutch court 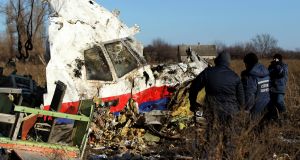 Wreckage from Malaysia Airlines flight MH17: It was flying from Amsterdam to Kuala Lumpur when it was shot down by a missile fired from territory in eastern Ukraine controlled by pro-Russian rebels. Photograph: Antonio Bronic

The judge at the MH17 murder trial has asked the Dutch public prosecutor to say whether it’s correct that the US is willing to declassify imaging allegedly showing a missile being fired which may have been responsible for the downing of the passenger jet.

The question – which was not expected to be answered in court – was put by presiding judge Hendrik Steenhuis when the trial in absentia of four suspects, adjourned two weeks ago, resumed briefly at the high-security Schiphol judicial complex on Monday.

Judge Steenhuis said it had been suggested that the imaging had been shared by the Americans with the Dutch security service AIVD, and, if this was indeed the case, he also wanted to know if the prosecution was considering the possibility that it might be added to the case file.

Malaysia Airlines Flight MH17 was flying from Amsterdam to Kuala Lumpur when it was shot down by a surface-to-air missile fired from territory in eastern Ukraine controlled by pro-Russian rebels, killing all 298 passengers and crew, and scattering wreckage over 50sq km.

The defendants – three Russians, Igor Girkin, Sergey Dubinsky and Oleg Pulatov, and a Ukrainian, Leonid Kharchenko – are each charged with 298 counts of murder, as well as with causing the Boeing 777 airliner to crash over the sunflower fields of war-torn Donetsk on July 17th, 2014.

Only one of the four, Oleg Pulatov, has engaged with the court, choosing to be represented by Dutch counsel accompanied by a Russian lawyer and denying any involvement in the attack – although so far refusing to travel to the Netherlands for the hearings, which are due to last until next year.

Moscow denies any involvement by its forces and does not extradite its citizens.

Due to the coronavirus pandemic, there were only six people in the courtroom: three judges with an empty seat between them to observe social distancing, a court registrar, a prosecutor and a lawyer for the relatives of those killed in the disaster.

Mr Pulatov’s legal team joined the proceedings by live stream, as did the media and relatives of the victims.

Other court hearings in the Netherlands have been shut until April 6th provisionally, but Judge Steenhuis said that not to have resumed the MH17 hearing as planned, even in such restricted circumstances, could ultimately have meant the entire case might have to have been restarted.

The judge concluded by giving lawyers for the victims’ families limited access to the case file of 36,000 pages plus digital evidence on condition that it was discussed with their clients only and nobody else, to ensure no “premature publication”.

The proceedings were closed after just 42 minutes and adjourned to June 8th.