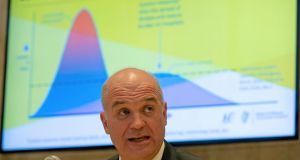 There is a growing expectation that the Government will introduce further measures to prevent the spread of the coronavirus on Tuesday, when public health experts are due to present new advice to ministers.

A ban on all non-essential travel, commercial and social activity are expected to be among the unprecedented options to be discussed by ministers at the Cabinet’s weekly meeting at Government Buildings.

The Government’s public health experts are meeting early on Tuesday morning to consider a range of possible actions and will advise the Cabinet of any new restrictions they believe are now necessary to slow the spread of the virus.

It is expected that significant new restrictions on travel, work and movement will be announced, which are likely to mirror recent moves made by several European countries and by the British government on Monday night.

Among the options under consideration by the National Public Health Emergency Team (NPHET), which will make the recommendations to Cabinet, are the closure of non essential business premises, closures of playgrounds where they have not been closed already and stricter implementation of physical distancing in parks and on beaches. There is a reluctance in government to close public spaces.

The meeting comes following the death of two more patients from Covid-19. Both involved males in the east of the country, bring the total number of deaths to six.

Another 219 cases have been reported, the biggest daily increase seen yet, the NPHET said on Monday evening.

There are now a total of 1,125 confirmed cases of Covid-19 in the Republic, according to chief medical officer Dr Tony Holohan.

Dr Holohan said he was “very pleased” with the response of the public to the restrictive measures introduced 10 days ago, with most people acting “very responsibly”.

But he said he was “not satisfied in every situation”. Where pubs were found to be in breach of the measures, the new powers available could be used to effect closure. The Garda’s assistance had also been asked in relation to social distancing.

He said it was too early to evaluate the success of the measures but this would be considered at the next meeting of the team on Tuesday. This meeting will also decide whether the measures will be extended beyond the original end-date of March 29th.

With the backlog of people waiting to be tested reaching 40,000 over the weekend, Dr Holohan said it was still the intention to “test as quickly and as broadly as possible”.

He said “tens of thousands” of people were now seeking testing every day as demand increased, and this was putting pressure on services. As well as healthcare workers, people with clinically advanced forms of the disease in hospital would be prioritised for testing.

Dr Holohan said there may be a lot of “worried well” among those seeking tests and it was expected demand would drop over time.

While the average waiting time - currently at four to five days, according to the HSE - was “longer than we would like” due to constraints in the supply of testing equipment, the advice for those awaiting testing was still to self-isolate, he said.

“We’re on our way to a substantial increase in testing capacity, which should reduce turnaround time.”

Asked whether any completed swabs had expired while waiting to be processed, Dr Holohan replied: “I can’t honestly say that hasn’t happened”. More information would be available at Tuesday’s briefing, he indicated.

Men account for 55 per cent of cases, according to an analysis of cases reported up to last Saturday.

Community transmission now accounts for 45 per cent of cases, close contact with confirmed cases for 23 per cent and travel abroad for 31 per cent. Some 37 clusters have been reported, involving an average of 5-6 cases each.

The vast majority of people are following guidelines on social distancing and hand hygiene and are able to recognise symptoms, research commissioned by the Department of Health indicates.

Some 88 per cent of people say they are staying at home rather than going out, according to the survey, while 84 per cent say they are practising social distancing in a queue.

Seven out of 10 people report they are sitting further apart from others, and most people are aware of the main symptoms of coronavirus.

Meanwhile, the World Health Organisation said the pandemic is accelerating with more than 300,000 cases now recorded and infections reported from nearly every country worldwide.

He called for global political commitment to change the trajectory of the pandemic, urging countries to take both defensive and attacking measures. – Additional reporting Reuters