A message from us: Retailers walk tightrope with coronavirus emails

In a crisis, marketers must strike a careful balance between the helpful and the hard sell 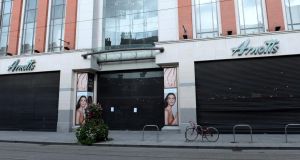 The sober, well-crafted email that underlined the new reality for me came from Arnotts. Photograph: Caroline Quinn/PA Wire

Last week was a blizzard of electronic communication: on WhatsApp, SMS, Twitter, Houseparty (a new one on me) and even dusty old Facebook, friends and family were in non-physical touch. But for another, more one-sided conversation, it was email that counted.

Retailers, the ones regrettably reclassified in our heads as sellers of non-essential items, steadily broke away from the standard drip-feed of promotions to send a different kind of update.

At their own pace, and with calm, innocuous subject lines such as “A note from us”, “A message from all of us” and “A message to our customers”, an inbox of retail brands bowed to the inevitable, announcing the temporary closure of their shops.

While some referenced “Covid-19” up top, others were more euphemistic

Some mentioned in careful postscripts that you could still order items online.*

Others were, out of necessity, less subtle on the same point. A few said they would continue to pay their staff, a fair (if not always possible) practice that has become important to their reputation in the eyes of many customers. And while some referenced “Covid-19” up top, others were kindly more euphemistic, such as the chocolatier whose initial message implored customers to “consider buying your Easter Eggs earlier than usual” because “there’s some disruption heading our way”.

Individually, the emails were at best background bleeps as normality was stripped away. Collectively the stream was a thudding reminder of why they were being sent.

The sober, well-crafted email that underlined the new reality for me came from Arnotts, which last Wednesday (alongside sister department store Brown Thomas) sent its own “important message”. It began by wishing everybody good health and wellbeing, went on to speak about the safety and wellbeing of its staff and customers and then concluded that from 5pm that day, it would be shutting its physical shop in Dublin until further notice.

It was not, by this stage, a surprise, but still … Arnotts. After years of being confused by its many mezzanines and thinking its wares exclusively for other people, I have grown fond of the sprawl of the place and can no longer remember the days I only ever crossed its floor as an indoor shortcut from Henry Street to Abbey Street. Arnotts, with its origins in pre-famine days, is a Dublin institution.

But the previous Saturday (while buying a casserole dish for imminent batch-cooking requirements), I’d seen how the remaining, spaced-out tables in its cafe were barely graced by customers. The Arnotts demographic was already staying away, for their own sake and the sake of others, and the gaps between people, though reassuring by our new metrics of reassurance, still had an ominous this-cannot-continue feel. You couldn’t just pretend everybody had skipped a morning in town to watch a resurgent Republic of Ireland soccer team play their first World Cup final.

Less than a fortnight after the retailer held its bright and trouble-free spring-summer fashion show, parading clothes meant for parties and weddings that won’t be held, it was shutting up shop until further notice.

By the end of last week, the only eyebrow-raising emails were the oblivious ones, clearly scheduled in advance of the unfolding crisis. “Goodbye mundane dressing,” read one email with intricate advice on which “bold pieces” to wear this spring. Sadly, nobody except the most enthusiastic of video-conference users has any need for a “bold piece” for the long journey from the bedroom to the kitchen, and as it transpires “hello, mundane dressing” would have been closer to the mark.

That’s not a complaint. It’s been far too easy to be caught out by the speed at which events have turned – at the weekend, there were still film trailers running in the television ad breaks – and besides, maybe online shopping for nice things will be an exercise in optimism for some people in need of comfort in their isolation.

But if marketers have been taught anything over the past decade, it’s not to get caught exploiting a crisis. Case studies abound of consumer-facing companies who have struck gallingly brash notes at the wrong time. It is slightly less misguided to do it on email, where at least the recipients are one-time customers who have opted in to receiving the messages, than it is to do it on Twitter, where a crass remark can be easily discovered and “ratioed” (meaning the hostile replies far exceed likes and retweets), but it is never smart.

Hurricane Sandy, which hit several Caribbean countries and the US in 2012, should prove sufficient cautionary tale for any company tempted to go in gung-ho: “In case you’re bored, 20 per cent off everything for the next 36 hours,” one offender, American Apparel, wrote in an email to customers. Sure, just enter code “SandySale” at checkout while people die or lose their homes, that won’t feel grimy at all.

With any luck, there will be no “SandySales” in this slow disaster. And yet even on the grim curve of a pandemic with all sorts of horrible ramifications for millions of lives, retailers still want to communicate with customers in the rational hope of still having some down the line.

Avoiding accusations of opportunism requires a delicate balance of being informative and helpful without tipping over into the hard sell. Get it wrong and customers may be reluctant to forgive.

*After writing this, I received what I thought was the perfectly honed email from Boden, a mostly online retailer that has closed its physical shops. It began with the acknowledgement that it’s “hard to know what to say right now”. Though it “might seem highly inappropriate to show you clothes for which you currently have no need”, the clothes were made, the catalogues printed. “It was too late to stop. We hope you don’t find it horribly insensitive.” Signed by the company’s founder, it assured that safety was the company’s top priority and hoped that the clothes will cheer customers up, “which is frankly what we all need”.

Ovoca Bio sees loss jump as ‘significant progress’ made on flagship treatment 08:07
Petrel Resources more than doubles loss to €243,000 07:48
Irish oil producer signs finance deal for up to €840,000 07:33
DCC expands US gas business with acquisition in Connecticut 07:18
Should I switch bank now with Ulster Bank at risk of closing? 07:09
Search executive
jobs on irishtimes.com