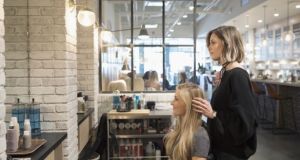 The hair and beauty industry has called for an urgent clarification from the Government about its status due to the coronavirus.

The hair and beauty industry has called for an urgent clarification from the Government about its status due to the coronavirus.

The newly formed Hair and Beauty Industry Confederation (HABIC) and other representative groups in the industry have written a letter to the Taoiseach Leo Varadkar calling on him to clarify remarks he made last week.

In comments made last week the Taoiseach stated it would be “counterproductive to shut restaurants and hairdressers and send people home to interact in the same way”.

She explained: “There is no physical way of keeping a social distance. There is no way you can do a client from six feet. There’s a contradiction there and we need clarity.”

The letter pointed out that there has been no specific advice to hair and beauty salons to shut and yet it would be impossible for such salons to operate.

The letter added: “As a collective of industry organisations, we do not believe that our industry at this point can meet the current requirements set out by the HSE.

“Following your statement, we are seeking leadership and guidance from Government. As an industry collective, we are seeking a clear and comprehensive recommendation from public health professionals and the Irish government as to the continuance of trading within the Irish hair, beauty and spa sectors.”

The industry stated that the closures are coming on the back of a difficult 2019 when the numbers employed decreased by 8 per cent due to the reversal of the VAT rate, abolishment of the trainee rate and the increase in national minimum wages.

“We say this in a time of crisis as these businesses are the backbone of Ireland’s towns and villages, providing essential services, and employment. They deserve your full support.”

The industry called for direct grant payments to salons to ensure liquidity for organisations at the threat of going bust, the reinstatement of the statutory redundancy rebate and the reduction of the VAT rate to 9 per cent.

Mrs O’Rourke Doherty said the state of the industry was “heartbreaking” at present with many businesses already closed.

“The vast majority of salons have taken it upon themselves to close. You are also finding pressure from society as well for them to close,” she added.

“There are still some definitely open and they are waiting for guidance. Many of them that will close will not know when to open. It’s a hard time in the service industry.