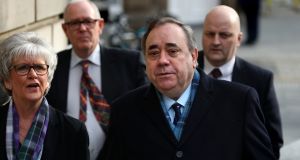 Alex Salmond arriving at the high court in Edinburgh on Monday, as he was cleared on 13 charges of sexual offences against nine women. Photograph: Andrew Milligan/PA Wire

Alex Salmond, the former first minister of Scotland, has been acquitted on all charges of sexual assault, in a decision which has sent shockwaves through the Scottish National Party.

The jury of eight women and five men at the high court in Edinburgh found Mr Salmond not guilty of 12 charges of attempted rape, sexual assault and indecent assault after around six hours of deliberations.

They came to the unique Scottish verdict of not proven on one charge of sexual assault with intent to rape, after hearing nearly nine days of evidence. With two jurors discharged on Monday morning, they reached majority verdicts on all charges.

Mr Salmond (65), from Strichen, Aberdeenshire, had denied the charges involving nine women, all of whom are current or former Scottish government officials, or SNP politicians.

Mr Salmond’s allies and opposition parties said the verdicts raised profound questions for the SNP and for Nicola Sturgeon’s government, which had already lost a judicial review started by Mr Salmond into its handling of an internal review of two misconduct complaints against him in 2018.

Joanna Cherry QC, an influential SNP MP, called for Mr Salmond to be allowed to rejoin the SNP without delay, and for an independent inquiry into how the party dealt with the allegations.

“Some of the evidence that has come to light both in the judicial review and at this trial raise very serious questions over the process that was employed within the Scottish government to investigate the alleged complaints against Mr Salmond and I am sorry to say some of the evidence also raises serious question marks over how these complaints were handled by the SNP,” she said.

Kenny MacAskill, formerly Salmond’s justice secretary and now an SNP MP, welcomed the verdict, tweeting that he was “delighted” for Mr Salmond and that some resignations were “now required”.

After the verdicts were read out, Mr Salmond displayed little emotion, but thanked court security officers and the judge, Lady Dorrian, the lord justice clerk, Scotland’s second most senior judge.

Speaking outside court afterwards MrSalmond said his faith in the judicial system had been “much reinforced”. Thanking his friends, family and supporters for standing by him throughout the trial, he said his own “nightmare” could not compare to the coronavirus crisis.

After thanking his “exceptional” legal team, Mr Salmond said he planned to release further information about the case at a later date.

“As many of you will know, there was certain evidence I would like to have seen led in this trial but for a variety of reasons we weren’t able to do so. At some point that information, that fact and that evidence will see the light of day but it won’t be this day, for a very good reason,” he said.

“And that is, whatever nightmare I have been in this last few years, it is as of nothing compared to the nightmare that every single one of us is currently living through. People are dying, many more are going to die. What we’re doing now and I know it’s your job to do, is not safe.”

In pre-trial court hearings, Mr Salmond’s defence lawyer Gordon Jackson QC had told Lady Dorrian there were text messages between complainants, Scottish government officials and SNP officials that raised questions about an orchestration of some of the allegations against his client.

Mr Jackson sought to get some of that material admitted into evidence. In January he told Lady Dorrian the defence believed “there was [a] concerted effort made by people in the government to influence this process, to get it as best they could in terms of criminal prosecution”.

He alleged those efforts were motivated by revenge because Mr Salmond had won his judicial review in January 2019, after the Scottish government admitted it had botched an internal inquiry into two sexual harassment complaints against him.

One of those texts included one sent by Leslie Evans, as permanent secretary, the Scottish government’s top civil servant, to another official after they lost the judicial review, which read: “We may have lost the battle but we will win the war.”

Lady Dorrian refused to allow much of that material, including the Evans text, to be used in court but allowed other messages to be admitted as evidence.

Mr Salmond was originally charged with 14 offences but he was formally acquitted of one charge, a 10th sexual assault, after the prosecution withdrew it halfway through the trial.

The not proven verdict on sexual assault with attempt to rape stops short of a finding of not guilty but leaves the accused innocent in the eyes of the law. Two jurors were discharged by the judge on Monday morning, reducing the size of the jury from 15 to 13.

Alex Prentice QC, as he summed up the case for the prosecution, told the jury that Mr Salmond was a sexual predator who exploited his power to prey on younger, subordinate women.

“This case isn’t about a plot or political conspiracy,” Mr Prentice told them. “This is about a powerful man who abused his power to satisfy his sexual desires with impunity.”

Mr Jackson disputed Mr Prentice’s account. He told the jury there were no direct witnesses to the alleged assaults, and that inconsistencies and contradictions repeatedly cropped up in the testimonies and evidence.

The Scottish Conservative leader, Jackson Carlaw, said the verdicts raised further “very serious questions” for the SNP, the Scottish government and Ms Sturgeon which would be investigated by a forthcoming Scottish parliament inquiry.

That inquiry may have to be deferred during the coronavirus pandemic, but he said: “This remains a national political scandal with profound questions of integrity for the first minister and her SNP government.”

Pauline McNeill, the Scottish Labour equalities spokeswoman, said the trial was extremely traumatic for all involved but added: “The verdict of this trial does not take away from the serious concerns about the Scottish government’s handling of this.

“We would expect questions about this to be fully explored during parliamentary scrutiny of this.”

Rape Crisis Scotland thanked the complainants for appearing in court. “Regardless of the verdict, the detailed descriptions and court coverage has been triggering and very hard for many people. As the volume and nature of calls to our helpline show, whenever there are public conversations about sexual crimes, survivors are listening,” the group said. – Guardian