In China Covid-19 leaves social upheaval in its wake 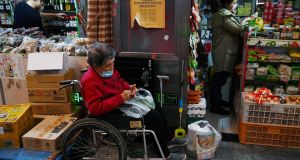 As people across China take tentative steps towards a new normality after two months of national trauma, the world they assess has been reshaped. Entering a state of flux, relationships are changing.

For some, this relationship change involves ending marriages – registry offices around the country have been inundated with divorce applications.

The unprecedented levels, an official said, were a result of stress from families being house bound for so long. Fear of virus spread, and related financial woes, were helping to “evoke any underlying marital conflicts”.

Schisms may appear on a wider level, too. Long the epitome of globalisation – trading, travelling and studying all around the globe – Chinese are, for now at least, being forced to think local.

“Why is Trump such a racist? Why does he want to isolate China?” a retired university professor asked me as we admired the blooming cherry blossoms in Beijing’s Chaoyang park.

Like other Chinese I have spoken to, he ridiculed the conspiracy theories being advanced by some Beijing officials that the virus originated in the US, not in Wuhan. “Preposterous, just a distraction,” he laughed. “But Trump is just looking for a distraction too, or a scapegoat.”

His take – a fairly common one here – is that the Chinese party-state really did fumble the ball early on, but then went a long way to making amends with an all-out effort to curtail the pathogen’s spread.

The ensuing “mask diplomacy” efforts, where China is sending supplies and expertise to stricken nations, “makes me feel proud again”, he said.

Donald Trump now demonising China and placing ordinary Chinese in danger was an irresponsible response, he felt. His own nephew is in university in the US, and now lives in fear of verbal or physical abuse. His parents want him to drop out of college and come home.

He spoke of a new cold war, “and that won’t help anybody”.

A businessman who has been exporting to the US and Europe was also angry at international criticism of China. “Would they have handled it better if the disease started in their countries? A new virus – so hard to deal with,” he said. “It looks like a mess over there too.”

With supply chains disintegrating and international markets in disarray, he said more Chinese companies would now be focusing on the domestic consumer. “It’s risky betting on international business these days,” he said.

Miranda had been hoping to do a master’s degree abroad, ideally in Ireland, the UK or the US. Now in a coronavirus world, however, she feels her realistic options in the near term are Beijing or Shanghai.

“It’s like the world got smaller. Things are different now,” she said.

The Chinese people’s relationship with their own leaders is also slowly shifting, said the professor. The party’s grip is still tight, but he feels they must be more responsive these days. He shows me a letter on his phone that has been circulating widely online – despite the censors’ best efforts – by Zhao Shilin, a former member of the party’s central committee.

“All negative events, including both natural and man-made disasters, are seen as threats to stability . . . a kind of rule has formed which holds that if any negative event can be handled in a low-profile fashion, then it should be,” he wrote in the letter to Chinese president Xi Jinping. “And so, the focus on this so-called stability is on the safety of the political regime, rather than the wellbeing of the people.”

The retired political leader wrote two long letters to Xi, dissecting the party’s handling of the crisis and concluding that “if preventative measures had been taken in a timely manner in December or January, the epidemic would be much smaller. As we recover . . . instead of propagandising our system’s great strength, we should instead look to fix the broken boards.”

The suggestion triggered a furious reaction from the public online

An aborted political campaign also casts light on the evolving nature of interactions between citizens and state.

When Wuhan party secretary Wang Zhonglin felt recently the citizens at ground zero were not showing sufficient appreciation for chairman Xi’s leadership, he launched a “gratitude education” campaign that asked the people of Wuhan, who have been under lockdown for more than 60 days, to find ways to show thanks to the chairman and the party.

The suggestion triggered a furious reaction from the public online, an unusual occurrence in a system that does not welcome dissent. In the face of widespread outrage, officials had to delete tens of thousands of scathing comments and the campaign was quietly shelved.

The people had spoken. Effectively saying: “Don’t push your luck.”