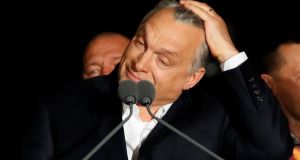 Hungarian prime minister Viktor Orban speaks to supporters after the results of the country’s parliamentary election were announced in Budapest on Sunday. Photograph: Leonhard Foeger/Reuters.

A leading editor at Hungary’s state television network punched the air in jubilation as he took a phone call on Sunday evening. Shortly afterwards, his subordinates realised what he had been told: Viktor Orban had secured a resounding victory in the parliamentary election.

Mr Orban and his Fidesz party achieved a third consecutive supermajority in the Hungarian parliament after a campaign primarily fought on an anti-migrant platform.

International monitors would later complain about the campaign’s “intimidating and xenophobic rhetoric” and note that public television “clearly favoured the ruling coalition, at odds with international standards”.

Several employees of the taxpayer-funded MTVA network told of how its channels pumped out government messaging, and at times false stories, with the goal of winning support for the prime minister’s anti-immigration message.

The journalists recalled how the network would focus on negative stories about refugees and migrants, linking them to crime and terrorism. Even on the eve of polling, there was no let up, as the M1 channel incorrectly reported a van driving into a crowd of people in Muenster, Germany, as an Islamist terrorist attack.

“I’d never experienced anything like that, even at MTVA: it was a clear lie,” said one of the journalists, who spoke on condition of anonymity.

The government message that millions of dangerous migrants are waiting to enter Hungary is reinforced on TV and thousands of billboards across the country.

The Hungarian-born financier and philanthropist George Soros, who has put billions of dollars into promoting civil society in central and eastern Europe, is portrayed as being part of a plot with Brussels and the political opposition to destroy Hungary by letting in foreigners.

“I think it created an atmosphere of fear. Pavlov reflexes have been created for words like danger, terrorism, migrants, opposition, Soros and Brussels,” the journalist said. News programmes regularly show archive footage from 2015 of migrants walking in Budapest, clashes between refugees and riot police at the Hungary-Serbia border, or terrorist attacks in Europe.

“Tolerance is regularly criticised, while anti-immigration sentiment is presented as the only valid opinion,” the journalist said.

The journalists believe the anti-migrant messages often comes directly from the government. People who work on stories directly involving Mr Orban receive a list of keywords to use.

“Sometimes the editor will come into the office on the phone and dictate a whole story to us, word for word. We do not know who is on the other end of the phone,” one said.

Documents sent in error to junior MTVA staff and seen by the Guardian appear to confirm direct governmental involvement.

Editorial directives produced by staff at the prime minister’s office are cut and pasted to give journalists talking points with which to carry out character assassinations of Hungarian citizens who are openly critical of the government.

One directive produced by the office last year targeted the activist Marton Gulyas, as well as a former Green party MP and a university professor. Another document focused on Mr Soros.

An evening of debate organised by Gulyas entitled “resistance, disobedience - without violence” is spun as proof that Gulyas was preparing for unrest and clashes with police.

“It was completely ridiculous,” Gulyas said, recalling the subsequent coverage. “We had these plans to protest against the government, but our intentions were of course completely non-violent. But pro-Fidesz outlets were constantly accusing us of creating violence and scandals.”

When asked about the government directives, a spokesperson for Mr Orban said the government does not answer media queries as it has no control over the media. MTVA did not respond to a request for comment. The state-run media conglomerate has an annual budget of about 80 billion forint (€257 million).

Over the past eight years, the government has moved to consolidate its hold over Hungarian print, TV and radio networks, with many media resources being bought by government-linked figures.

Origo.hu, a popular news website, is one of many resources that changed hands, moving from a subsidiary of Deutsche Telekom to ownership by the son of the governor of Hungary’s central bank.

András Pethö, who was the deputy editor but left in 2014 to co-found a new wesbite, direkt36.hu, said: “It was a really good place to do journalism, but then they started putting pressure on us to ignore certain stories. We didn’t comply, and my editor was forced out.

“I looked at Origo in the weeks before the election, and every second story had the word migrant in the headline.”

Meanwhile, the government-friendly media largely ignores corruption scandals that broke in the run-up to the election involving leading Fidesz figures.

Mr Orban has four more years to rule, with a two-thirds majority in parliament that allows him to change the constitution, and there are fears that the government may move against the remaining islands of critical media. The final edition of the daily, Magyar Nemzet, one of the few outlets to run critical stories before the election, was on Wednesday. The newspaper’s owner, a businessman who fell out with Mr Orban, decided to stop funding it.

In the aftermath of the vote, TV2, a television channel owned by a government-friendly businessman, ran a report naming 24 alleged Soros agents, including Gulyas, independent journalists and NGO leaders. On Wednesday, the pro-government weekly Figyelo also ran a list of supposed Soros agents.

The journalists said they had decided to speak out “from a sense of decency and truth”, and said some state TV employees were thinking of resigning after the election result.

“I felt terrible, because I could see that we can and did influence people,” said one. “Some of us had reassured ourselves that nobody watches us, that we don’t matter. It turns out that we do - awfully.” - Guardian