At least eight Palestinians have been killed and over 1,000 others injured during a daylong of bloody confrontations between Palestinian demonstrators and Israeli soldiers at the border between Israel and the Gaza Strip. Video: CCTV 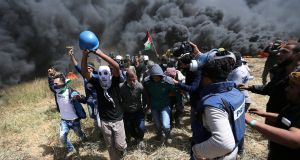 A Palestinian journalist died on Saturday after being wounded by Israeli fire while covering deadly protests along the Israel-Gaza border.

Yaser Murtaja (30), a cameraman for Palestinian Ain Media, was the 29th Palestinian killed in the week-long protests.

Photos showed Murtaja lying wounded on a stretcher wearing a navy-blue protective vest marked ‘PRESS’ in large black capital letters. Health officials said a live bullet had penetrated the side of his abdomen and he succumbed to his wounds in hospital.

An Israeli military spokeswoman said the army was looking into the incident and could not comment further at this stage.

The daily protests, dubbed “The Great March of Return”, began on March 30th along the Israel-Gaza frontier, reviving a longstanding demand for the right of return of Palestinian refugees to towns and villages from which their families fled, or were driven out, when the state of Israel was created.

Israel has stationed sharpshooters to stop attempts by Palestinians to breach the border or sabotage the security fence.

Freelance photographer Ashraf Abu Amra said he was next to Murtaja, whom he said was wearing a helmet and protective vest. Abu Amra said they were both clearly marked as journalists.

“We were filming as youths torched tyres. We were about 250m from the fence,” said Abu Amra. “Israeli forces opened fire and injuries began. Yaser and I ran to film when suddenly Yaser fell to the ground.

“I screamed to him ‘Yaser are you alright?’. He didn’t respond and there was blood on the ground underneath him. I knew it was a bad injury and people carried him away.”

Video footage showed Murtaja being carried to an ambulance with crowds around and black smoke rising from where protesters had set tyres alight, east of Khan Younis, in the southern Gaza Strip.

Murtaja was married with a two-year-old son. Hundreds of mourners, among them many journalists, attended his funeral on Saturday.

His body was covered with a Palestinian flag and his press jacket laid beside him on the stretcher as it was carried through the streets of Gaza City to his home for a last farewell.

“I made him breakfast, he ate quickly, he was in a hurry to go to work,” said Murtaja’s mother, Yusra, recounting the morning of the protest.

“I thought he would recover from his injury, I didn’t expect his death, but God has chosen him as a martyr, thank God,” she said, sitting on the ground as mourners came to the house to pay their respects.

Murtaja, on his Facebook page, had posted two aerial photos taken at the border in the past week. It was unclear if he had taken them himself.

At least three other journalists were wounded on Friday in other locations, Gaza officials said. There have been no Israeli casualties in the protests.

Israel’s response to the protests has drawn international criticism, with human rights groups saying it involved live fire against demonstrators posing no immediate threat to life.

Israel says it is doing what it must to defend its border and its troops have been responding with riot dispersal means and fire “in accordance with the rules of engagement”.

Hamas, the Islamist group that runs Gaza, says the protests demanding the right of return of refugees will continue.

The Israeli government has ruled out any right of return, fearing the country would lose its Jewish majority.

Israel says many of the dead were militants and that Hamas, which is designated a terrorist organisation by the West, is using the protests as cover to launch attacks along the border and ignite the area, while putting Gaza’s civilians at risk. Hamas rejects this. - Reuters