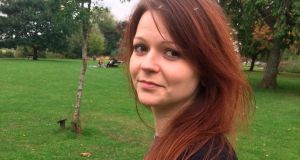 Yulia Skripal, addressed comments made by her cousin Viktoria in the Russian media, asking her not to contact or visit her in Britain. Photograph: AP

The international chemical weapons watchdog has backed the UK’s findings on the identity of the chemical used to poison the former Russian spy Sergei Skripal and his daughter Yulia in Salisbury, England.

The findings by the Organisation for the Prohibition of Chemical Weapons will be a major relief to the UK, which has said Novichok, a military-grade nerve agent developed by Russia, was used in the attack.

The executive summary released by the OPCW does not mention Novichok by name, but states: “The results of the analysis by the OPCW designated laboratories of environmental and biomedical samples collected by the OPCW team confirms the findings of the United Kingdom relating to the identity of the toxic chemical that was used in Salisbury and severely injured three people.”

The OPCW, which does identify the chemical by its complex formula in a classified report that has not been made public, also notes in its summary that the chemical had an “almost complete absence” of impurities.

The UK has called for a UN Security Council meeting to discuss the findings. Foreign secretary Boris Johnson said in a statement: “There can be no doubt what was used and there remains no alternative explanation about who was responsible – only Russia has the means, motive and record.

“We will now work tirelessly with our partners to help stamp out the grotesque use of weapons of this kind and we have called a session of the OPCW executive council next Wednesday to discuss next steps,” the foreign secretary said. “The Kremlin must give answers.”

The Skripals were found collapsed on a park bench in Salisbury, Wiltshire, on March 4th. A police officer, Det Sgt Nick Bailey, who was among the first at the scene, was also taken to hospital but discharged on March 22nd.

The UK government’s position is that it is highly likely the Russian state targeted the Skripals with a nerve agent, which military experts at Porton Down identified as Novichok.

Russia has vehemently denied involvement and waged a propaganda battle to try to discredit Britain’s account of the attack, which sparked an international row resulting in the expulsions of diplomats from all sides.

At the request of the British government, experts from the OPCW carried out an independent investigation. The OPCW technical secretariat, based in The Hague, handed its report to British officials on Wednesday; it was for the UK to decide whether and what to make public.

The OPCW does not have the power to identify the source of the nerve agent, only to spell out its chemical properties. It is standard OPCW procedure not to identify the laboratories involved in testing the samples, but the organisation draws from a multilaterally agreed list of labs.

At a special meeting of the OPCW executive last week, Russia lost a vote demanding that it be jointly involved in testing the sample. The Russian embassy in London said it would only accept the OPCW’s findings if there was Russian participation.

The Kremlin’s strategy has been to exploit weaknesses and inconsistencies in the UK’s case. It seized on a blunder by Mr Johnson, who wrongly claimed last week that the government science facility at Porton Down had attributed the nerve agent to Russia. In fact, the attribution was based on intelligence and analysis of previous Russian state hits.

Sergei Skripal moved to Britain in a spy swap in 2010 and settled in Salisbury. Yulia was visiting from Russia when they were poisoned, probably via contamination from his front door.

Despite initial fears that they would not survive, Yulia Skripal was discharged from hospital to an undisclosed location earlier this week, while her father is said to be improving rapidly.

In a statement released by the Metropolitan police on her behalf on Wednesday, Yulia Skripal said she did not wish to take up the offer of services from the Russian embassy in London.

The statement said her father remained seriously ill and that Yulia was still suffering from the effects of the nerve agent. She also addressed comments made by her cousin Viktoria, reported in the Russian media, asking Viktoria not to contact or visit her in the UK. – Guardian