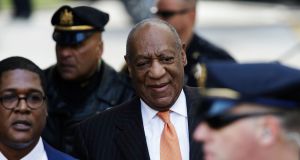 Bill Cosby’s defence attorney launched a relentless character assassination in a Pennsylvania courtroom on Tuesday, against the woman accusing the comic of drugging and molesting her, calling her a con artist and a liar who was interested in only one thing: “money, money and lots more money”.

In the second day of the retrial of the TV star, the famed Hollywood lawyer Tom Mesereau left little to the jury’s imagination in his opening statement. Speaking for almost an hour, he repeatedly attacked the credibility of the key prosecution witness, Andrea Constand, a Canadian massage therapist who alleges she was rendered comatose and sexually assaulted by Cosby in January 2004.

“You are going to ask yourself what did she want from Bill Cosby, ” the jury was told by Mr Mesereau, as he shook his distinctive shock of shoulder-length white hair. “You already know the answer: money, money and lots more money.”

He added that Ms Constand was “a con artist. We’ll prove it. A con artist”.

Cosby faces three counts of aggravated indecent assault, each carrying an upper sentence of 10 years in prison. He was tried for the same charges last June but the case collapsed after the jury was unable to agree on a verdict.

At the centre of both trials are the allegations of Ms Constand, who became a friend of Cosby’s while she was working at his alma mater, Temple University, as a manager of the women’s basketball team. Ms Constand alleges she was invited to dinner at the star’s home, then given three blue pills to “relax” her and digitally penetrated by Cosby after she was effectively unconscious.

In the new trial, a fresh jury of seven men and five women has been convened. The star of the Cosby Show has an entirely new defence team. Part of Mr Mesereau’s defence strategy was to arouse the sympathy of jurors. Having to sit through not one but two trials was “brutal”, he said.

Mr Mesereau added: “Mr Cosby’s no criminal. He was foolish, he was ridiculous, he was lonely and attracted to a younger woman, but he didn’t commit any crime and you will gladly find him not guilty.”

Mr Mesereau also invoked the 1997 murder of Cosby’s son, Ennis Cosby, in a street robbery in Los Angeles. As he did so the defendant raised a white handkerchief and dabbed his eyes.

But the overwhelming thrust was disdain for Cosby’s alleged victim. Mr Mesereau referred to a key defence witness, Marguerite Jackson, who worked with Ms Constand at Temple University at the time of the alleged attack. Ms Jackson was not allowed to give testimony at the first trial. But the presiding judge in both trials, Steven O’Neill, has indicated he will allow her to appear this time.

Mr Mesereau said Ms Jackson had been told by Ms Constand she had been sexually assaulted by a “powerful person” whose identity she did not divulge. Later, Ms Jackson asked Ms Constand directly whether she had been assaulted. According to the defence lawyer, Ms Constand replied: “No, but I can say I was. I can set up the celebrity and get a lot of money for my business.”

The defence lawyer went on to present a raft of other criticisms of Ms Constand in an effort to damage her credibility in the eyes of the jurors. They included inconsistencies in her statements to police; at least 100 phone calls between her and Cosby after the assault was alleged to have occurred, most placed by Ms Constand; and a fraudulent pyramid scheme Ms Constand allegedly operated while at Temple.

In the face of this offensive by Cosby’s lawyers on its star witness, the prosecution is turning to the supporting evidence of five women who have alleged they were assaulted by the TV comic in strikingly similar ways, including being made incapable of giving or refusing sexual consent through drugs.

In pre-trial rulings, the judge granted the prosecution permission to call five women into the witness box. In the original trial, the same judge only permitted one woman, Kelly Johnson, to appear.

The five include former supermodel Janice Dickinson, who alleges Cosby drugged and attacked her in Lake Tahoe in 1982; Janice Kinney, who claims she was also rendered comatose before being sexually assaulted in Reno, Nevada in the same year; and Heidi Thomas, an aspiring actor who alleges she was drugged and molested in Reno two years later.

The prosecution is allowed under Pennsylvania law to call the five women in an effort to establish a common thread of behaviour on the part of the TV star. Each of the women has alleged the same combination of pills which Cosby encouraged them to take as “relaxants” before he assaulted them while they were in a semi-conscious state.

Ms Mesereau tried to pre-emptively negate the impact of the women’s testimony by portraying their stories as irrelevant to the charges involving Ms Constand. “It’s called prosecution by distraction,” he said. “When you don’t have a case you have to fill the time with something else.”

The other shift that the defence team must factor in since the first trial 10 months ago is the eruption of the #MeToo movement on social media. Prominent men in the realms of Hollywood, the media, politics and other walks of life have all fallen in a wave of accusations about sexual harassment and assault.

More than 50 women have come forward to accuse Cosby of sexual assault, all of whom went public before the explosion of #MeToo. – Guardian