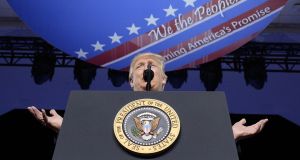 Donald Trump will not attend the annual White House correspondents’ dinner traditionally addressed by US presidents.

It comes after the president barred news organisations, including the BBC, from a White House press briefing, denouncing them as “fake news”.

Mr Trump tweeted on Saturday: “I will not be attending the White House Correspondents’ Association Dinner this year. Please wish everyone well and have a great evening!”

The Guardian and The Daily Mail were also blocked from the meeting on Friday in a move that has angered supporters of a free press’s role in a democracy.

Shortly after the US president gave a speech attacking the media as the “enemy of the people,” his press secretary Sean Spicer restricted multiple media organisations from entering the daily briefing.

CNN, Buzzfeed and The New York Times, of which Mr Trump has been highly critical, were also denied access.

Jeff Mason, president of the White House Correspondents’ Association, said the organisation was “protesting strongly” about the move.

“We encourage the organisations that were allowed in to share the material with others in the press corps who were not,” he added.

He told BBC Radio 4’s Today programme: “The enemy of the people label is one that we certainly object to, the media is not the enemy of the American people or any people.

“The media is an important and critical part of American democracy and yes, it is damaging when the President of the United States downplays that or denigrates it, and it’s something that we object to and certainly disagree with.”

The truth is hard

The New York Times is to respond to Mr Trump’s attacks on the media by broadcasting an advertisement called The Truth Is Hard during Sunday’s Oscars.

Mr Trump has previously been publicly critical of the BBC, twice sarcastically describing the broadcaster as “another beauty”.

The BBC has sought clarification from the White House on why its representative was denied access.

The broadcaster’s Americas bureau editor Paul Danahar added: “Our reporting will remain fair and impartial regardless.”

The White House invited a pool of news organisations that shares its work with other press to the briefing and said it felt “everyone was represented”.