Greeks starting to wonder exactly what policies the EU represents

Greece Letter: self-doubts of nation may be shared with others in Europe 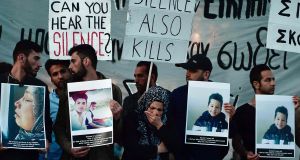 Migrants, solidarity groups and relatives hold posters during a protest in central Athens against “Fortress Europe” and the EU-Turkey deal, which they allege delayed a rescue operation of a migrant boat in March. Photograph: Louisa Gouliamaki/AFP/Getty

Given that Greece had first-hand experience of a fascist government as recently as 1967-1974, and that today it has a neo-Nazi party lying third in the opinion polls, the need for a democratic profile is all the more evident.

Following the attempted coup in Turkey in July 2016 (which has yet to be explained), eight members of the Turkish military arrived in Greece, claiming political asylum. Turkey has persistently argued for their extradition but has provided no prima facie evidence of their involvement in the alleged coup. Last month, Turkey renewed its application to the Greek courts, with charges against the soldiers of terrorism and attempted murder.

The Greek courts, for their part, have consistently refused to extradite the soldiers on the grounds that they would not receive a fair trial. This reached its peak last month when the appeals court stated that “If they are extradited they will be subjected to torture, humiliation and degradation.” Turkey in return has accused Greece of harbouring terrorism.

The escalating row between Greece and Turkey concerns not only human rights but a raft of other issues such as borders, mineral exploitation and the treatment of refugees. The refugee situation will become a seasonal problem as spring and summer approach, making the dangerous crossing from Turkey to Greece slightly less dangerous, and it is exacerbated by Turkey’s threat to rescind its agreement with the EU to restrain Syrian and other refugees from making the crossing to Greece.

The human rights issues in all these cases echo the recent situation regarding the Irish courts and the requested extradition of a Polish citizen. But more is at stake than the individual fates of the Turks and the Pole. Ireland’s problems with Poland are of course an internal EU matter, but this and the Greek-Turkish problem have something in common: for 45 years, Europe was split east-west by the Soviet hegemony, but today there are no geographical borders to the conflict between populism and elitism.

The Greek government is an uneasy alliance between the far-left and the far-right. The Italian election threatened a similar result. It’s increasingly difficult to find stability in Europe as a whole and it’s getting easier – perhaps too easy – to become a Eurosceptic.

While the majority (60 per cent) of Greeks still favour European membership, the question is being asked: what exactly does the EU represent in terms of policies and the way they affect ordinary people? Is it inclusive of cultures, religions, skin colours? Is it aligned unreservedly to Nato? Is it compassionate?

There are EU member states which do not, at present, conform to the ideals and principles on which the European concept was established. For example the Czech Republic, Denmark, Holland and Austria exhibit anti-people profiles in respect of refugees and asylum seekers – issues on which Greece’s positive record is demonstrable.

But an editorial in Kathimerini (Greece’s leading daily) recently pointed to several factors which show Greece as a third-world country: cooked-up charges of corruption against former government ministers and prime ministers; kowtowing to the demands of imprisoned terrorists; and the alleged association of the governing party with a gun-toting Greek-Russian billionaire. Yanis Palaiologos, author of an expose of Greece’s bureaucratic shortcomings, pointed out last month that the government, “while it may be in office, is still not in power”. This is, in effect, negative government.

Syriza came to power because citizens had exhausted their tolerance for the two-party system and the paralysis in the public service. But the inevitable submission to force majeure from the EU, the International Monetary Fund and domestic vested interests disabled the impetus for change.

Like many Europeans, Greeks are in a state of disenchantment, with the absence of political leadership that might alleviate the motor neurone disease of their national existence.

The Greek situation amounts to an inexperienced and outclassed government split on ideological lines, incapable of honouring its pre-election promises, and still uncertain whether it can exit its third bailout with any dignity or assurance.

Greek journalists call consistently for a “new narrative” – a route map to a future that is credible and acceptable. But we are discovering that the self-doubts of Greeks may be shared with others in Europe and that the need for a new narrative is common to all. The current disagreements between centre and periphery in fact call into question whether there is any cohesive factor within the EU shared by all its citizens.

The negative government in Greece seems to be symptomatic of an European implosion. President Michael D Higgins’s recent call, while in Athens, for the smaller states to enter the European conversation depends on their having something to say that is sensible and ethically agreeable.