At a press briefing in Dublin, the Russian ambassador to Ireland, Yuri Filatov, has said that Russia had to expel an Irish diplomat after he was told one of his own staff would have to leave Ireland. Video: Bryan O'Brien 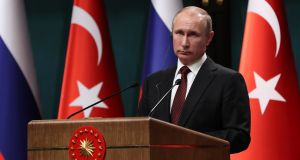 Russian president Vladimir holds a joint press conference with the Turkish president after their meeting at the Presidential Complex in Ankara, on April 3rd, 2018. Photograph: Adem Altan/AFP/Getty Images

The worst crisis in East-West relations since the Cold War deepened on Wednesday as the EU backed the integrity of the UK’s investigation into the poisoning of former spy, Sergei Skripal – and Russia demanded a joint investigation, claiming its alleged involvement had been “fabricated”.

An emergency gathering of the 41-country Organisation for the Prohibition of Chemical Weapons (OPCW) ended when Russia, which had called the closed-doors meeting, lost a ballot that could have established the new investigation by 15 votes to 6, with 17 abstentions, said diplomatic sources.

Among the countries that backed Russia in the vote were China and Iran, according to Reuters.

Russia has now convened a meeting of the UN Security Council for Thursday, as President Vladimir Putin, on a visit to Ankara, said he hoped “common sense would prevail” and that the damage being done to international relations by the poisoning controversy would end.

The war of words that has characterised the row continued even as ambassadors from Russia and the West arrived at the OPCW headquarters early on Wednesday, with Moscow’s determination to drive a wedge between Britain and the European Union apparently having little effect.

In a tweet, the British delegation described Moscow’s demands for a joint inquiry into the poisoning of former intelligence agent, Sergei Skripal, and his daughter, Yulia, as “perverse” and “a diversionary tactic designed to evade the questions the Russian authorities must answer”.

That combative tone was echoed inside the private meeting of the 41-member executive council, where the UK’s acting envoy, John Foggo, warned: “It seems clear that Russia will never accept the legitimacy of any investigation into chemical weapons unless it comes up with the answer Russia likes.”

Russia’s proposal for a joint, UK/Russian investigation into the Salisbury incident is perverse. It is a diversionary tactic, and yet more disinformation designed to evade the questions the Russian authorities must answer.

This was an apparent reference to the fact that Russia has, in the past, also questioned the OPCW’s findings, particularly that the Syrian government was responsible for a sarin gas attack that killed some 90 people in April 2017 in rebel-held Khan Sheikhoun, in the northern province of Idlib.

The British government will have been buoyed by the EU’ strong statement of support at the meeting, where its delegation said it had “full confidence” in the Skripal investigation, and praised its co-operation with technical experts at the OPCW.

“It is imperative that Russia responds to the British government’s legitimate questions, begins to co-operate with the OPCW secretariat, and provides full and complete disclosure to the OPCW,” the EU statement said.

Moscow, however, continues to deny any responsibility for the attack – and says the entire controversy has been “fabricated” by the UK.

On Sunday, Russia sent the OPCW a series of 13 questions it says remain unanswered about the organisation’s investigation, but which its critics say are designed to sow international doubt about the technical experts’ procedural practices.

Specifically, it’s understood to have asked for the names of the scientists sent to the UK. It has asked for details of the chain of custody which shows that the sample of the military-grade nerve agent being analysed has remained intact. And it has asked the OPCW how it can be sure the UK did not hand over a false sample.

Primarily, however, Russia’s permanent representative to the OPCW, Alexander Shulgin, said it was unacceptable that Russian scientists had been barred from the Novichok nerve agent tests as a result of British objections.

The UK’s case against Russia has not have been helped, however, by Tuesday’s unexpected statement by the director of Porton Down defence laboratory, Gary Aitkenhead, who said that while its scientists had, indeed, identified the agent used as a Novichok, they had not been able to identify its place of origin.

Mr Aitkenhead said any suggestion that the Novichok had come from Russia had originated with the British government and not Porton Down, based on secret intelligence to which he was not privy.

This appeared to contradict a statement from foreign secretary Boris Johnson, in which he said it was “absolutely categorical” that the nerve agent had originated in Russia.

As a result, Labour accused Mr Johnson of “misleading the public”.