Greece ‘will not tolerate’ border challenges from Turkey 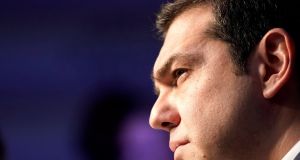 Greece’s prime minister Alexis Tsipras: ‘Our message, now, tomorrow and always, is clear . . . Greece will not allow, accept or tolerate any challenge to its territorial integrity and its sovereign rights.’ File photograph: Denis Balibouse/Reuters

Greece will not tolerate any challenges to its territorial integrity, its prime minister said on Thursday, days after Turkish and Greek coastguard vessels collided close to disputed islets in the Aegean Sea.

Each side blamed the other for Monday’s collision off an islet known as Imia in Greek and Kardak in Turkish. They came to the brink of war in 1996 in a sovereignty dispute over the islets.

Seeking international support, prime minister Alexis Tsipras underlined that Greece’s border was also that of the 28-nation European Union, and his foreign minister briefed the head of Nato and the US military chief on Turkey’s “provocative behaviour”.

“Our message, now, tomorrow and always, is clear . . . Greece will not allow, accept or tolerate any challenge to its territorial integrity and its sovereign rights,” Mr Tsipras told an audience at the shipping ministry.

“Greece is not a country which plays games.”

Mr Tsipras told coastguard officers: “Challenges and aggressive rhetoric against the sovereign rights of an EU member state are against the EU in its entirety.”

Turkey’s foreign ministry denied the Turkish vessel was at fault. Turkish prime minister Binali Yildirim told Mr Tsipras in a phone call on Tuesday that Greece needed to take measures to decrease the tension in the Aegean Sea, a source from Mr Yildirim’s office said.

Turkey and Greece, Nato allies, have long been at odds over issues from ethnically split Cyprus to airspace and overflight rights and relations have worsened since Greece blocked the extradition of eight Turkish soldiers that Ankara accuses of involvement in 2016’s failed coup.

“I had the opportunity to show them material of proof that dismisses Turkish claims that [the incident at Imia] was an accident,” Mr Kammenos said in a statement.

“Turkey is provoking and violating Greek and EU waters, it proceeds with acts that violate any notion of maritime law and is coming close to [causing] an ‘accident’ in the Aegean. It has full responsibility.” – Reuters