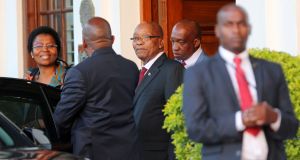 A meeting of African National Congress leaders on Monday will finalise the ruling party’s exit talks with South African president Jacob Zuma, who stands accused of widespread corruption linked to the looting of state resources.

Both men have been involved in talks around the South African president’s voluntary resignation from office since last Tuesday, and public pressure on the ANC to finalise the matter increased as the dialogue dragged on.

“We know you want closure on this matter,” Mr Ramaphosa said to the crowd, “but it is important to manage these discussions with purpose. The issue we are seeking is that you, our people, must be put first, and not the interests of others”.

Mr Ramaphosa clarified the key aim of transition talks with Mr Zuma was to unite South Africans. In addition, he acknowledged the former liberation movement was struggling with internal unity, but insisted Mr Mandela’s centenary year “offers us a new beginning”.

It remains unclear whether Mr Ramaphosa and Mr Zuma have reached an acceptable deal, as the ANC president declined to address the outcome of their negotiations.

If Mr Ramaphosa and Mr Zuma were unable to agree on conditions that would support the latter’s voluntary exit, the NEC will likely be asked to recall Mr Zuma from office.

If Mr Zuma refuses to take heed of the recall – his term officially ends in 2019 – he is expected to face a vote of no confidence in parliament before the end of the month.

Alternatively Mr Zuma could be impeached if he is suspected of violating the South African constitution or breaking the law. To be successful, this approach would need two-thirds of the National Assembly’s 400 MPs to support it.

If Mr Zuma was impeached he would lose all the benefits an ex-South African receives, including his pension and around-the-clock security details.

Newspapers reported Mr Zuma’s conditions for stepping down include state-guaranteed safety for him and his family, his security being maintained at its current level, and for the state to pay his legal fees for current and future matters linked to his tenure in government.

The beleaguered Mr Zuma’s power has waned considerably since he stood down as ANC leader last December even though he remains head of state.

His popularity among the electorate is also at an all-time low due to allegations of widespread corruption hanging over him.

He is waiting to hear if 783 criminal charges related to a government arms deal in 1999 will be reinstated against him. He also stands accused of helping the wealthy Gupta business family of illegally securing billions of rand in state contracts.

Mr Zuma and the Guptas deny any wrongdoing. They claim they are victims of internal ANC power struggles.