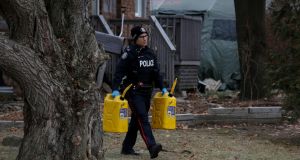 Police guard the grounds of a house they searched, after landscaper Bruce McArthur was accused of murdering five people and putting their dead bodies in large planters on his clients’ properties, in Toronto, Canada, January 29th. Photograph: Chris Donovan/Reuters

Canadian police said on Thursday they found the remains of at least six people on the grounds of a north Toronto home where a 66-year-old man charged in a series of killings worked as a landscaper.

Bruce McArthur was arrested last month and charged with murdering five men who disappeared over several years from a part of Toronto that has for decades been the centre of the city’s gay community.

Police have called McArthur a serial killer but have come under fire for denying for months, in the midst of disappearances, that someone was targeting the gay community.

Police have said they are searching for more human remains at the home and other properties and expect to lay more charges.

Investigators have so far matched the remains of one person, Andrew Kinsman (49), Toronto Police detective-sergeant Hank Idsinga told a news conference outside the home where the remains were found.

Mr Kinsman disappeared in June and is among those McArthur is charged with killing. Authorities have yet to identify the remains of the other five bodies recovered.

The search for evidence at the home has been hampered by frozen ground, Idsinga said. –Reuters