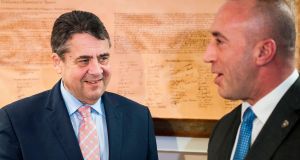 Germany has told Serbia that it must accept the sovereignty of Kosovo if it wants to join the European Union, in a blunt message that was welcomed in Pristina as it prepares to mark a decade of independence from Belgrade.

“If Serbia wants to move toward the European Union, the building of the rule of law is a primary condition, but naturally also the acceptance of Kosovo’s independence,” Mr Gabriel said alongside Kosovo’s prime minister Ramush Haradinaj.

“That is a central condition to take the path toward Europe.”

The EU unveiled broad plans last week for expansion deeper into the Balkans, and said Serbia and Montenegro were currently frontrunners and could join the bloc by 2025 if they implemented major reforms.

Kosovo fears that if Serbia enters the EU first, it could block the accession of a small country that declared independence 10 years ago on Saturday, following a bloody 1998-1999 conflict between separatist rebels and Belgrade’s government forces.

“It would be in everybody’s interest to find a solution so that Serbia finishes the issue of recognition,” Mr Gabriel said.

“This is important for Serbia, otherwise it will not be able to become a member of the EU. But it is in Kosovo’s interest as well.”

Twenty-three of the EU’s 28 members, including Ireland, are among 115 countries that recognise Kosovo’s independence, but Mr Gabriel said he hoped that Spain, Romania, Slovakia, Greece and Cyprus would drop their objections to its status.

“Naturally, enabling membership of the European Union is the end goal. One of the conditions for that will be to persuade the five European Union countries which don’t recognise Kosovo that such a recognition makes sense, because Kosovo will never again be a part of Serbia.”

Serbia’s leaders vow never to accept Kosovo’s independence while talking in vague terms about the need to compromise to secure EU membership.

EU foreign ministers were expected to discuss the membership prospects of Serbia, Kosovo, Bosnia, Macedonia, Montenegro and Albania in Sofia on Thursday before being joined by those countries’ top diplomats for more talks on Friday.

Also on Thursday, Kosovo’s leaders met Montenegrin prime minister Dusan Markovic in Pristina to try to end a border dispute between the two countries which is an obstacle to Kosovo’s bid to secure visa-free travel to the EU.

“I call on Kosovo politicians to unite and ratify the agreement on border demarcation with Montenegro, to open the way for visa liberalisation,” Kosovo’s president Hashim Thaci said.

“This would be the best present for citizens of Kosovo on the 10th anniversary of independence.”