Florida shooting: ‘My beautiful cousin’s life was taken by a f**king lunatic’ 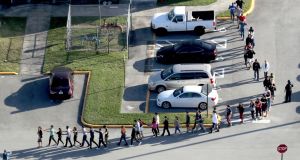 Students are evacuated by police from Marjory Stoneman Douglas High School in Parkland, Floridaa on Wednesday after a shooter opened fire on the campus, killing 17 people. Photograph: Mike Stocker/South Florida Sun-Sentinel via AP.

Police have yet to name the 17 people killed by a shooter at a Parkland, Florida, high school on Wednesday, but family and friends have started to identify their lost loved ones on social media.

Jaime Guttenberg, a student at Stoneman Douglas, was confirmed dead after her parents appealed on social media for help finding her. They were unable to reach her.

Hours later, her father posted that they “lost our baby girl to a violent shooting at her school”.

He pleaded for privacy, writing: “I am broken as I write this trying to figure out how my family gets through this.”

Guttenberg’s cousin, Laurie Singer Matthias, wrote on Facebook: “I am beyond grief stricken. I am beyond heartbroken. I am pissed as hell.”

“My beautiful cousin’s young life was taken today by a f**king lunatic with a semiautomatic,” she wrote. “Why??? Why???”

“This beautiful young lady simply went to school today. And now her parents and our family are grieving, my precious cousins lives all our lives have been changed forever.

“RIP Jaime Guttenberg. Shine your beautiful light from the heavens for us to make our way through these very dark times.”

Aaron Feis, an assistant football coach and part-time security guard, was named as a victim by the high school football team’s Twitter account.

“It is with Great sadness that our Football Family has learned about the death of Aaron Feis,” it read. “He was our Assistant Football Coach and security guard. He selflessly shielded students from the shooter when he was shot. He died a hero and he will forever be in our hearts and memories.”

Football coach Willis May told the Florida Sun Sentinel that Feis was shot while helping a student. May said he heard from a student that Feis jumped to help her and pushed her through a door, placing himself in the line of fire between the student and the gunman.

Students told the Daily Beast that Feis often acted as a mentor around the school, and May called Feis a “big ol’ teddy bear”.

“Hardcore - he coached hard. Real good line. He did a great job with the [offensive] line,” May told the paper. “He took pride with working with those guys. Loyalty - I trusted him. He had my back. He worked hard. Just a good man. Loved his family. Loved his brother - just an excellent family man.”

Feis also served at the school as a school security guard. He was among those who first responded to the popping sounds in the halls, which some mistook for firecrackers.

“I heard Aaron say, ‘No, that is not firecrackers.’ That’s the last I heard of him,” May said. May recalled that later, he saw the gunman, Nikolas Cruz, trying to blend in with students during the evacuation.

Former co-workers remembered Feis on Facebook, with one writing that the security staff had run into Cruz before. “I’ve worked with Coach Feis for about 11yrs we all became very close as a security staff,” Yvonne Grant wrote. “We all had encounter[ED] Nikolaus at some time escorting him out of class room for his behavior etc. I knew both of them very well.”

Another friend of Feis, Reginald Gray, wrote: “he was always a soldier. Always”. - Guardian