ICC to examine Duterte’s ‘war on drugs’ in Philippines 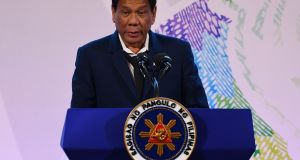 International Criminal Court (ICC) prosecutors have opened a preliminary examination into Philippines president Rodrigo Duterte’s “war on drugs”, which has led to the deaths of thousands since it began in July 2016.

Prosecutor Fatou Bensouda said on Thursday the examination was a review of whether crimes against humanity had been committed and whether the Hague-based court might have jurisdiction to eventually bring suspects to trial.

About 4,000, mostly urban, poor Filipinos have been killed by police in the past 19 months in a brutal crackdown that has alarmed the international community. Activists believe the death toll is far higher.

“While some of such killings have reportedly occurred in the context of clashes between or within gangs, it is alleged that many of the reported incidents involved extra-judicial killings in the course of police anti-drug operations,” Ms Bensouda said.

A spokesman for Mr Duterte, Harry Roque, said the court would accuse the president of crimes against humanity, but Ms Bensouda’s statement did not identify potential suspects.

Mr Roque dismissed the action as “a waste of the court’s time and resources”.

Mr Roque said he had discussed the ICC issue for two hours the previous night with Mr Duterte, a former prosecutor, adding that the president is more than willing to face trial.

“He’s sick and tired of being accused,” said Mr Roque, an international law expert. “He wants to be in court and put the prosecutor on the stand.”

Since it was set up in 2002, the ICC has received more than 12,000 complaints or communications, just nine of which have gone to trial.

A preliminary investigation is the first formal step the prosecutor takes when considering whether a situation in one of the ICC’s member states could eventually lead to charges.

Ms Bensouda will now begin a process that may take several years, gathering information on whether any crimes were committed, whether they are serious enough to be admissible at the court, and whether the court has jurisdiction, since it can only prosecute crimes when a member state itself fails to do so.

If Ms Bensouda then wishes to open a formal investigation, she would first seek approval from international judges.

Regarding the Venezuela investigation, Ms Bensouda said some protesters had also resorted to violence that left members of the security forces dead or injured.

Mr Duterte has dared the ICC to bring him to trial and said he would rot in jail to save Filipinos from crime and drugs.

His tirades against the court are notorious, and include calling it “hypocritical” and “useless”, after Ms Bensouda first voiced concern over his crackdown.

He has threatened to cancel the Philippines’ ICC membership and said European lawyers were “rotten” and “stupid”.

Police say those thousands of killings were during legitimate anti-drugs operations in which the suspects had violently resisted arrest. Mr Duterte has boasted about killing thousands of drug dealers and has told police they can kill if they believe their lives are in danger.

But critics accuse him of incitement to murder and of refusing to investigate allegations that police are planting evidence, fabricating reports and executing users and dealers.

Mr Duterte rejects such accusations and typically chides the international community for listening to what his government says are biased human rights groups that have no proof.

A Philippine lawyer sent the ICC a complaint against Mr Duterte and at least 11 senior officials last April, saying crimes against humanity were committed “repeatedly, unchangingly and continuously” and killing drug suspects and other criminals had become “best practice”.

Senator Antonio Trillanes and congressman Gary Alejano sent a supplementary communication several months later urging an ICC investigation, which included a list of public statements made by Mr Duterte that they said amounted to “shoot-to-kill” orders.

Mr Trillanes said the examination “should jolt Duterte into realising that he is not above the law”.

Mr Roque called the complainants “domestic enemies of the state” and said the ICC had no jurisdiction.

Pending court cases meant domestic legal processes had yet to be exhausted, and the anti-drugs campaign was a sovereign issue, he said. – Reuters/AP