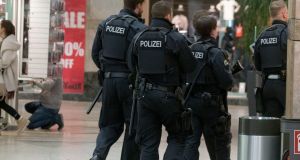 A unit of police officers is seen during a security operation in the shopping centre Centro in Oberhausen on Thursday. Photograph:Arnulf Stoffel

Two Kosovo-born brothers have been detained on suspicion that they were planning an attack on a shopping mall in western Germany.

The arrests come as an international manhunt continues for Anis Amri over the Berlin Christmas market truck attack that left 12 people dead and 48 others injured.

Police said the brothers, aged 28 and 31, were held in Duisburg in the industrial Ruhr region in the early hours of Friday. They suspect they may have been planning an attack on the Centro shopping centre in nearby Oberhausen.

They say authorities are probing how far along the suspected attack plan was and whether anyone else was involved.

Police say they increased their presence at Centro and a nearby Christmas market on Thursday evening after receiving a tip.