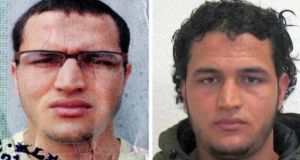 An undated handout made available by the German federal criminal police office shows suspect Anis Amri, who is wanted in connection with Monday’s terror attack in Berlin. Photograph: EPA/BKA 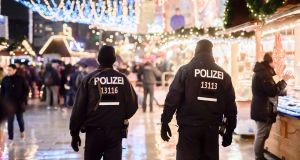 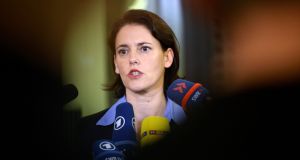 Forensic evidence from the truck that ploughed into a Berlin Christmas market on Monday, killing 12, suggests that Tunisian suspect Anis Amri was at the wheel of the vehicle, a spokeswoman for Germany’s federal prosecutor’s office said on Thursday.

“Today we carried out searches in various locations in North Rhine-Westphalia and Berlin. Anis Amri is believed to have been at those places previously,” Frauke Koehler, spokeswoman for the prosecutor’s office told reporters.

“Based on a tip-off, a bus in Heilbronn was searched. There have been no arrests.”

She said investigators had also received the first forensic results from an examination of the truck.

“Fingerprints were found on the outside of the truck, on the driver’s door and on the ‘B pillar’,” she said.

“At this point in the investigation, we assume Anis Amri drove the truck. A warrant for his arrest has been issued today.”

“In the last days I’ve been proud at how calmly the vast majority of people have reacted to this situation,” said Dr Merkel, hours after two small far-right demonstrations on Wednesday demanded “regime change” in Germany.

It has also emerged that earlier this year, Amri, the chief suspect in the attack, reportedly said he was ready to serve as a suicide bomber - in communications intercepted by German authorities.

Der Spiegel reported on messages from Anis Amri offering to carry out a suicide attack, collected during the interception of communications by Islamist preachers suspected of recruiting for so-called Islamic State.

Though Amri was already on a security watchlist, and considered a danger to the state, intelligence officers doubted the remarks were concrete enough for an arrest and decided not to arrest him, according to Der Spiegel magazine.

In another embarrassing setback, police found ID papers identifying him in the truck only after a second search of the lorry cab on Tuesday, a day after the attack.

His ID papers were discovered under the lorry driver sat, 12 hours after Berlin police let go a first suspect, as investigators waited until sniffer dogs had been let into the cabin.

That and other revelations - that Amri had a criminal record in Italy as well as Islamist links - have racked up pressure on German authorities to explain how a man under regular police surveillance avoided a July deportation order to remain in Germany.

On Thursday, German federal interior minister Thomas de Maizière said the evidence - in particular fingerprints in the lorry cabin - indicated “a high probability that the suspect is the perpetrator” of Monday’s deadly attack.

As police raided a mosque in Berlin on Thursday, police in the western city of Dortmund arrested four men.

In Tunisia, two of Amri’s brothers, Walid and Abdelkader, said they feared he may have been radicalised by radical Islamists while he spent almost four years behind bars in Italy.

“He doesn’t represent us or our family,” Abdelkader told Sky News Arabia.

“He went into prison with one mentality and when he came out he had a totally different mentality.”

On Wednesday, German police issued a €100,000 reward for information leading to the capture of Amri.

Amri arrived in Germany in April 2015 from Italy, where he had served a four-year prison sentence in Palermo for arson during his time as an asylum-seeker on the island of Lampedusa.

Following his release, Italian authorities added him to a denial-of-entry list for the entire Schengen passport-free zone, but he was already in Germany at this point.

Asylum application staff became suspicious when it emerged that he knew nothing about Egypt and, after searching Germany’s central migration register, found he had already filed for asylum under at least half a dozen other identities.

In July, a German court ordered his immediate deportation after he was arrested on assault charges linked to a drug feud.

After a day in a deportation facility, he was released because he did not have a valid passport.

The Tunisian embassy refused to issue a passport initially, claiming he was not their citizen. A Tunisian passport eventually arrived on Wednesday.

Germany’s decentralised police, asylum and criminal investigators hit back on Thursday at claims they had failed to do their job, insisting that they were too understaffed to observe full-time all of the 549 people classified as a security threats to the German state.

On Wednesday night, leading members of the far-right Alternative für Deutschland (AfD) joined a “solemn vigil” of about 150 people before Angela Merkel’s chancellery in Berlin for the 12 people killed in the truck attack on Monday evening.

“As chancellor, she made a fatal decision for Germany and sadly we now have the consequence, the main blame rests with her,” said Alexander Gauland, AfD leader in Brandenburg.

The demonstration, which included an address by a priest and funereal music, was organised by a far-right alliance that warned in an open letter aimed at the German chancellor: “Political Islam wants to destroy Christendom.”

At the same time on Wednesday evening, the neo-Nazi NPD held a demonstration demanding that Germany “seal the borders”.

The demonstration was held on Hardenbergplatz, adjacent to the scene of Monday’s attack.

Some 130 NPD supporters were challenged by 800 counter-demonstrators gathered under the slogan “Solidarity. Tolerance. Love.”

Among the counter-demonstration was Mr Klaus Lederer, Berlin’s cultural minister and a Left Party politician in the city, who described the NPD march as “disgusting”.

Another counter-demonstrator, Green Party MP Özcan Mutlu, said: “We won’t allow them instrumentalise the shocking attack for their incitement and hate.”

The Breitscheidplatz market where the attack took place partially re-opened on Thursday morning to visitors.

Italy has also confirmed that a 31-year-old national, Fabrizia Di Lorenzo, was among the victims of Monday’s attack.

Ms Di Lorenzo was from the rural Abruzzo region east of Rome and lived in Berlin.

According to her family, she was at the market to buy presents before returning to Italy for Christmas.