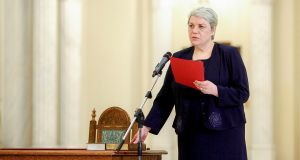 Romania’s president has delayed a decision on whether to nominate an economist as prime minister, saying he needed more time to assess a candidate who would be the Balkan state’s first female and first Muslim leader.

Sevil Shhaideh was proposed to lead Romania’s new government by the Social Democrats (PSD), which comfortably won parliamentary elections earlier this month, and has formed a coalition with the smaller Alliance of Liberals and Democrats.

“A majority coalition has been set up in parliament. As a result, in the following days I will have discussions on these topics, and an appointment will occur after Christmas,” president Klaus Iohannis said on Thursday, when he had been expected to formally approve the PSD nomination.

Ms Shhaideh was proposed on Wednesday in a surprise move by PSD leader Liviu Dragnea, who is barred from becoming prime minister because he was convicted of vote rigging in a 2012 referendum.

“The PSD won the elections, and this makes me entitled to the position of prime minister. But I don’t want to start a useless conflict” with the president, Mr Dragnea said after talks with Mr Iohannis, who is known for his tough stance against corruption.

“Yes, she is nominated for prime minister . . . but the political responsibility lies with me,” the president said of Ms Shhaideh (52), who comes from the small Muslim community in mostly Orthodox Christian Romania.

“I have come up with a solution that I hope will be accepted so that a government is in place quickly to ensure we have a budget plan approved by January 15th,” Mr Dragnea said. “She has the capacity to work, knowledge of public administration and the absorption of EU funds, and of all the ministries’ operations.”

Some opponents of the PSD, as well as political analysts, believe Ms Shhaideh, a former minister for regional development, could effectively be a political puppet for the much more influential Mr Dragnea.

Critics believe the PSD leader could in this way run Romania from behind the scenes, in much the same way the leader of Poland’s ruling party and its dominant politician, Jaroslaw Kaczynski, is seen as a de facto ruler who pulls the strings of his country’s government and presidency.

“Dragnea has nominated a loyal person . . . It will be a government controlled by Dragnea,” said Sergiu Miscoiu, a political science professor at Babes-Bolyai University in Cluj.

The PSD won 45 per cent of the vote in the December 11th election, barely a year after it resigned from government amid major street protests triggered by a fire at a nightclub in Bucharest that killed 64 people.

Many Romanians saw the blaze at the Colectiv club as a consequence of the corruption that blights the country, with officials suspected of taking bribes to give permits and overlook breaches of safety rules. Poor medical care is also alleged to have contributed to the high death toll.

The PSD successfully appealed to voters with pledges to boost wages and benefits, which critics fear could damage the country’s fragile economy.