Radicalisation not the only factor in recent terrorism 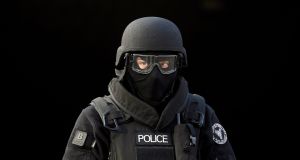 A policeman at Midi train station after the Brussels bombings in March. Photograph: Christian Hartmann/Reuters

Islamic State claimed that Mohamed Lahouaiej-Bouhlel, the Tunisian who killed 86 people and injured 434 others on the Promenade des Anglais in Nice on Bastille Day, was a “soldier of the caliphate”. But investigators have found no evidence of contact between Lahouaiej-Bouhlel and Islamic State, also known as Isis.

The most lethal jihadist attack in a western country this year was apparently more the result of an unhinged mind than Islamic radicalisation. Belgium, France, Germany  and the US were all struck by Islamist violence in 2016. Mental illness, doubtless fanned by the general zeitgeist, appears to have been a factor in attacks in Florida and Ohio, and in three of four attacks in Germany in July.

The diffuse pervasiveness of the threat was perhaps the greatest shock, the way everyday objects, including a refrigerated rental lorry and kitchen knives belonging to the mother of a 19-year-old wannabe jihadist, sowed death.

A lorry was again deployed in the attack on a Berlin Christmas market on December 19th that killed 12 and injured 48.

As French justice minister Jean-Jacques Urvoas said in November, “There is no longer a battlefield, front or rear lines to the jihadist threat . . . No place is secure, and the most banal objects can become weapons.”

Terrorism was by no means an exclusively western phenomenon. More than 300 were killed in an Islamic State suicide bombing in Baghdad in July. A splinter group of the Pakistani Taliban killed 75 in Lahore in February, in one of numerous bomb attacks in that country. And Turkey, straddling the east-west divide, was hit several times.

The year saw three types of attacks in Europe and the US: those carried out by psychopaths with no apparent links to Islamic State but whose crimes were seized upon by the group; “classic” suicide missions by commandos trained and funded by Islamic State from its “capital” in northern Syria, Raqqa; and locally recruited “low-cost” jihadis encouraged by Raqqa through the encrypted messaging service Telegram.

The March 22nd suicide bombings that killed 32 people at Zaventem airport and in the Maalbeek metro station in Brussels were the only “classic” attacks of the year, carried out by jihadists dispatched from Raqqa.

The Brussels attacks can be seen as an aftershock of the November 13th, 2015, massacre of 130 people in Paris and Saint-Denis. They were carried out by the same Franco-Belgian network of some 40 Islamists, most of whom returned to Europe from Syria in the 2015 migrant crisis.

The group were better organised than originally assumed, with about a dozen safe houses. Unidentified members of the network are still at large.

The Brussels assassins had intended to attack the Euro 2016 football championship in France, but lowered their ambitions when several accomplices, including Salah Abdeslam, the only survivor of the November 13th attacks, were arrested.

On July 26th, Adel Kermiche and Abdel Malik Petitjean, both aged 19, slashed the throat of Fr Jacques Hamel (86) while he said morning Mass in Saint-Étienne-du-Rouvray, a working-class suburb of Rouen.

This was a prime example of “low-cost jihad”. Kermiche and Petitjean had tried and failed to reach Syria. They had no vehicle, no weapons and no money, but they were egged on by Rachid Kassim, a French jihadist in the war zone.

Kassim was also in contact with Larossi Abballa, who stabbed a police officer and his partner to death in front of their three year-old son outside Paris in June. And he inspired three young women in a failed car-bombing near Notre Dame Cathedral in September.

Islamic State’s “caliphate” in Iraq and Syria continued to shrink, by 30 per cent over two years, according to IHS Conflict Monitor. Western experts claimed territorial losses would inhibit the group’s recruitment, and portrayed continuing attacks in the West as a sign of desperation.

From mid-October, the US backed a 100,000-strong coalition of Kurdish and Shia Muslim Iraqi forces in an offensive against Mosul. Islamic State fought back with hundreds of suicide bombers, snipers and artillery. The battles for Mosul and Raqqa dragged on into December.

The response of governments has largely been what Le Monde’s foreign editor, Christophe Ayad, calls “Israelisation”: a massive surveillance and security crackdown, coupled with the inability to address underlying political problems.

Polls show that 96 per cent of the French believe the terrorist threat is high, compared to 84 per cent of US and British citizens. Twenty-eight per cent of French respondents said they would do Christmas shopping online, out of fear of attacks.

In the five UN Security Council member countries, only 48 per cent of the population now oppose the torture of enemy combatants, compared with 66 per cent in 1999. The International Committee of the Red Cross also found greater acceptance of “collateral damage” among civilians in the “war on terror”.